For Immediate Release
Office of the First Lady
June 29, 2006

Mrs. Bush's Remarks at a Media Preview of the Official Dinner with the Prime Minister of Japan
State Dining Room

MRS. BUSH: President Bush and I are so excited to be able to host Prime Minister Koizumi tonight and the rest of the Japanese delegation. And we've chosen a look and food that we hope will suit the tastes of our Japanese guests.

I think the flowers, as usual, are fabulous. Nancy Clarke is our florist here, and she had previewed several choices for me, and this is the one we thought was the prettiest for a summer evening. I like that it's clean and minimal, and I think it's perfect -- suitable for Japanese taste and American taste, and of course, looks especially beautiful in the middle of the summer in this dining room. The green silk cloths with the green cymbidium orchids and then the clear glass cylinders that we'll be able to see who's across the table from us through the glass. 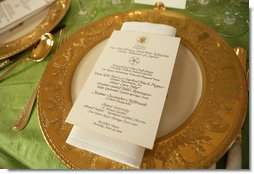 As your press packet tells you, we're using the Clinton china, the gold china that's so pretty in here, and the gold service, as well, that all belong to the White House. And I think it will make a really beautiful green and gold-looking evening.

The menu card, if you've seen it, has a rendering of a cherry blossom on it, which is a symbol of Japan, but also a symbol of the friendship between the United States and Japan, because, of course, the Japanese gave us the cherry blossom trees that decorate Washington so beautifully in the spring every spring.

So I'm excited about having this dinner. I'm thrilled about the chance to go to Graceland tomorrow with Prime Minister Koizumi. I think we'll have a really good time. We have a really fun lunch scheduled at a Memphis institution, a restaurant that's a long-time restaurant in Memphis that I think it will be really fun to take Prime Minister Koizumi to.

Daniel Shanks is here at the end. He picked wines that he can tell you about in a minute, but that have some relationship to Japan. Nancy Clarke -- let's see, Lea Berman is next. She's the Social Secretary, and, of course, she is the one who orchestrates all of this, the whole evening, and, in fact, the whole event, starting with the arrival ceremony this morning, and then going to the dancing, the final dancing tonight after the end of the state dinner.

And then Nancy Clarke is the florist, and Cris Comerford is our new chef. She's been here, been our chef since early last summer, but this might be her -- I guess the Christmas menu was the first time that you had talked to the press. And we had a tasting of this menu upstairs a couple of weeks ago to make sure we liked all the dishes, and we did. And then, of course, our dessert, once again, will be spectacular, like it always is. It's chocolate bonsai trees, and if you noticed in the foyer when you came in, we have three bonsai trees that are on loan from the American -- from the arboretum, the National Arboretum, from their beautiful collection of bonsai, especially for this visit of the Japanese Prime Minister. 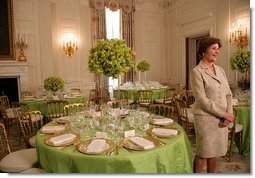 So, welcome, everyone. I think you're going to get to taste one of the things that we're going to have tonight for dinner. And I don't know if you have any questions for Cris or Nancy or Lea or Daniel.

Q Mrs. Bush, could talk about the decision to have a state dinner tonight? This has become rare in this administration.

MRS. BUSH: Well, I wouldn't say it's really rare. We've hosted nine or 10 state leaders at Camp David. We've hosted at least 10 state leaders, including Prime Minister Koizumi, at the ranch. Those have been opportunities to get to know world leaders in a more relaxed and private setting, especially at the ranch, where it's our own home and they can see what our life is like. We have had a number of state dinners, but this one is not actually a state dinner, because the head of state, of course, would be the Emperor of Japan. But this is an official dinner, just like a state dinner, for a Prime Minister.

And we're thrilled to have the opportunity to host Prime Minister Koizumi. We actually had scheduled a state dinner earlier for him. I don't know if we'd announced it, but we'd scheduled it before he called for the last elections, his last elections.

So anyway, now we're glad to get to have him. And as it turned out, the weather was perfect. We were afraid it would be really too hot for the arrival ceremony in June in Washington, but it was just right.

Q Mrs. Bush, could you talk a little bit about the jukebox that the President presented to the Prime Minister, and his reaction?

MRS. BUSH: Well, we have -- we found a really great jukebox from the '50s -- refurbished, obviously, and filled with 45 songs, including 25 of Elvis Presley's. So it was in the Red Room when we came in from the arrival ceremony this morning. And Prime Minister Koizumi searched the keys and found, "I want you, need you, and love you," and played that first. (Laughter.) So he and the President sang a duet. (Laughter.)

Q Since you are going to be in Graceland, and of course, you'll be surrounded by Elvis Presley music, are you going to do any jiggling? (Laughter.) 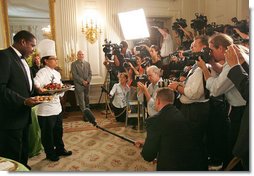 Q Mrs. Bush, in tonight's dinner, is there any food which includes U.S. beef? Since the --

Q Produced in the U.S.

MRS. BUSH: Yes, produced in Texas. So we'll be enjoying that. Okay, I'm going to leave it to the other people, if you have any questions for them.

MRS. BUSH: No, he gave a bicycle to the President, and then he gave a baseball-themed present, which was a big reproduction of the Babe Ruth -- Japanese Babe Ruth postage stamp, and a big photo of Babe Ruth in Japan. So that's fun to have.

Q Could I ask one more follow-up question? Do you have any special plans for the President's birthday coming up? Because that's the next big event.

MRS. BUSH: Just a friends and family party. It will be fun.

MRS. BUSH: Thank you very much. We will have fun. I think it's going to be a very fun evening. Our orchestra is the Brian Setzer Orchestra. He'll play a lot of both the President's and Prime Minister Koizumi's favorites, and he's especially known for his guitar. So I think that will be terrific.

Q Mrs. Bush, can the President keep these presents that he gets, and can the Prime Minister take the jukebox with him --

MRS. BUSH: I don't know what the laws are in Japan, but, in fact, gifts from heads of state to the President of the United States go to the American people, they go to the archives, belong to the government. Well, they'll go to the Bush library, wherever it's going to be at some point. But no, he can't use them personally. So that's too bad.