For Immediate Release
Office of the First Lady
June 29, 2006

The Clinton State Service was commissioned to commemorate the 200th anniversary of the White House with designs inspired by architectural motifs - from the State Dining Room on the dessert and soup plates to the cream soup cup and saucer. 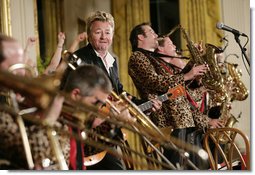 On Display on the State Floor:

On display in the Grand Foyer of the State Floor and in the Blue Room are three magnificent specimens of Bonsai trees, on loan from the National Arboretum for the visit of the Japanese Prime Minister. In the Grand Foyer, the Tanaka Ezo Spruce has been in training since l925, and the Iwasaki White Pine has been in training since l855. The smaller specimen in the Blue Room is a Nakamura Eurya.

Entertainment in the East Room
THE BRIAN SETZER ORCHESTRA

Brian Setzer combines vintage rockabilly with the attitude of post-bop jazz. He moved from his home in Long Island to England and performed in the 1980s with his band, the Stray Cats, whose live shows and three top-10 singles sent their first album to the top of the charts.

After the Stray Cats disbanded, Mr. Setzer pursued his own projects, with collaborators as diverse as artist and producer Phil Ramone and the Clash's Joe Strummer. Powered by the smash "Jump Jive An' Wail," the Brian Setzer Orchestra surpassed the Stray Cats' commercial success, selling millions of albums worldwide and performing sold-out tours. Along the way, Mr. Setzer built a reputation as one of the world's most respected guitarists.

Of all his accomplishments, including seven Grammy nominations and three Grammy wins, the Brian Setzer Orchestra is his pride and joy: an ensemble of world-class musicians, entertaining music fans of all ages.