For Immediate Release
Office of the First Lady
June 26, 2006 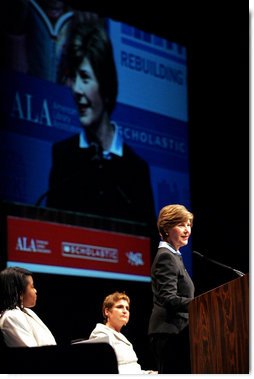 I also want to acknowledge Leslie Berger, the ALA President-elect. Thank you very much, Leslie, for all the work you're going to do and have already done. I think Lieutenant Governor Mitch Landrieu and Cheryl, his wife, are here. Thank you all very much for joining us today. Seletha Nagin, wife of Mayor Ray Nagin has joined us. Seletha, thank you for coming. And Dick Robinson, the President and CEO of Scholastic. Scholastic has been such a huge partner in school libraries around our country -- also with the Texas Book Festival and the National Book Festival, and I want to thank you very much for that, Dick. Anne Radice, the Director of the IMLS is here, the Institute of Museum and Library Services, the federal agency. Anne, thank you for joining us. And also out in this crowd are members of the Laura Bush Foundation Library Board -- the library experts, the librarians who are the ones that read the grants and choose the schools that get a Laura Bush grant.

Also, I hope in this crowd, but I haven't seen them yet, are a group of Middle Eastern and North African librarians. (Applause.) Thank you all very much for coming. They're here in the United States. Some of you may have hosted them in your home cities over the last week. They're here with the State Department's Middle East Partnership Initiative, and they've visited libraries all over our country to see what American libraries are like. So welcome, and welcome to the United States. (Applause.)

I'm delighted to be here with all of you for this year's conference of the American Library Association. I've seen the great work that ALA members are doing in the many libraries I've visited around our country. In public libraries, in school libraries, through ESL instruction and literacy programs, librarians are encouraging lifelong lovers of reading. And their encouragement is taking increasingly innovative forms.

Earlier this month, I was in Guadalupe, Arizona, to see "Tom s and the Library Lady," a play based on Pat Mora's book about Tom s Rivera and how his early love of learning was nourished by an Iowa librarian. The play is staged throughout the Maricopa County Library District, through a partnership between Childsplay, a local Arizona theater company, and the library district, with funding from the National Endowment for the Arts and local donors. Thanks to the dedication of the Maricopa County Youth Services Coordinator, Tim Wadham, almost 72,000 Arizona students have seen the play, and there are plans for "Tom s and the Library Lady" to begin playing in libraries around the country next year. 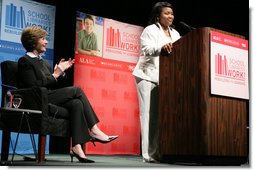 "Tom s the Library Lady" is an example of how librarians are collaborating with community groups, government institutions, corporations and local philanthropies to extend the resources and reach of libraries, and to get the message out to the public, and especially to children, about the importance of libraries and reading.

Thanks to each and every one of you for your service in your communities. And thanks to the ALA leadership for your commitment to the New Orleans community. ALA is the first organization to hold a major convention in this city since last summer's hurricanes, and this gathering is an important step in New Orleans' rebirth as a convention destination, which is vital to this area's long-term economic recovery.

Today I'm happy to join you as you discuss another important part of Gulf Coast recovery -- perhaps the most important part -- and that is the rebuilding of schools. Schools are at the heart of Gulf Coast recovery. Until there are schools for children, families won't return home. And for many children who stayed on the Gulf Coast after losing their homes and all their possessions, their school is their only comfort left.

The task of rebuilding these schools is unprecedented in its difficulty and scope. Never have state school officials and school superintendents had to restore entire school districts as fast as they can without a tax base to finance the reconstruction. The work of rebuilding schools may be daunting, but it's absolutely essential. And as all of us know, each of these new schools must have a new school library.

In the wake of the hurricanes, school officials and librarians have shown extraordinary determination. I've seen this determination at nearby Chalmette High School in St. Bernard Parish. Before Katrina, Chalmette's library had an impressive collection of almost 29,000 volumes. The school was especially proud of its collection of Life magazines, which dated back to the very first issues in the late '30s, and which students used as primary sources to study the history of the 20th century. But when Katrina struck, every book and every magazine was lost to eight feet of water. Chalmette High School had been a designated evacuation center, and amid the surging floodwaters of Katrina, people swam or took boats to the second floor of the school. Chalmette's first floor was completely flooded, and the second floor was used as a shelter for almost a week.

Last month, I saw the results of Doris's hard work when I stood in Chalmette's beautiful new library, which was filled with excited students and lined with brand new shelves awaiting new library books. Doris Voitier is here with us today. Is Doris out there? Oh, here she is, right here on the very front row. (Applause.) Let me tell you, too, that Doris didn't wait till she heard from FEMA. She just billed FEMA after she rebuilt her school. (Laughter and applause.)

Shortly after last summer's hurricanes, the leadership council of the Foundation gathered for what was to be the last meeting. The council had reached the fundraising goal for its endowment and was ready to disband. But at that meeting, the council decided to continue raising money for a special fund to help schools in the Gulf Coast region.

So the Gulf Coast School Library Recovery Initiative was established, which will help schools damaged by the hurricanes rebuild their libraries' book and materials collections.

And the task is huge. You saw some of it in the video. According to the U.S. Department of Education, 1,121 private and public schools in the Gulf Coast region were damaged or destroyed. And as many of you know, the basic cost of building a book collection for an elementary school library is about $50,000. And the cost for a good basic secondary school library is usually over $100,000.

As schools rebuild, they are eager to have these resources so they can restock their libraries. In fact, within a month of announcing the initiative, 24 schools had applied for grants. And last month, the Laura Bush Foundation awarded its first round of grants, totaling $500,000 to ten schools in Louisiana and Mississippi.

I know ALA shares this commitment to rebuilding Gulf Coast libraries. ALA members have raised more than $300,000 to help libraries affected by the storms restore their materials collections. And during this conference, many ALA members are giving their time and energy to local libraries left understaffed by the hurricanes.

Joining these efforts are major corporations, private foundations and individuals from around the country. During this conference, you've heard of the generosity of Scholastic, of Dollar General, of the Bill & Melinda Gates Foundation, and the Bush-Clinton Katrina Fund.

Corporations are helping, and I've found that they're very happy to help. So I urge you to reach out to corporations in your communities and ask them for help with your own libraries.

Federal institutions, too, are doing their part. The Institute of Museum and Library Services is dedicating $1 million in grants for library projects on the Gulf Coast, and is reserving $500,000 to help staff temporary library facilities in Gulf Coast communities.

So today, I'm happy to announce that the IMLS Librarians for the 21st Century program is awarding more than $20 million to support almost 3,900 library science students at 35 universities. (Applause.) With these grants, IMLS is ensuring that librarians will have the training they need to keep libraries and education at the center of community life.

When Hurricanes Katrina and Rita roared through the Gulf Coast, they brought images of destruction that we're unaccustomed to seeing in the United States. But they also brought images we've come to expect in America. In the faces of the victims, we saw resilience and courage. In the rescue workers and volunteers, we saw generosity and self-sacrifice. And we see endurance and hope in every act of rebuilding, especially of schools -- schools like Second Street Elementary School in Bay St. Louis, Mississippi.

Before Katrina hit Second Street Elementary School, the librarian, Marianne Higginbotham, had always taught her 4th and 5th graders how to take good care of their library books. So as the hurricanes bore down on their homes, many of these children took Marianne's lessons to heart. During the evacuation, most of their possessions were left behind, and ultimately lost. But as they fled, these kids made sure to save their library books. (Laughter and applause.) Most of the children's homes were destroyed, and for months, some of them moved from evacuation shelters to relatives' homes to FEMA trailers -- all the while safeguarding their library books. When they returned to school in November, Marianne said some of the children were afraid they would have a big fine. (Laughter.) But the students treasured those books, and they were happy they'd saved them. And when the rescued volumes were presented to Marianne, the children told her proudly, "I brought your book back."

These books are the beginning of Marianne's new collection, and now with the help of a grant, she'll add many more new books to her reconstructed library.

With the help of private foundations -- companies like Scholastic and Time Warner, federal institutions, and organizations like the ALA -- more books will be brought back to school libraries throughout this region, and good schools will help bring families back to the Gulf Coast.

Thank you for your commitment to Gulf Coast libraries, and thank you for serving your communities and our country every day. Thank you all very much. (Applause.)