For Immediate Release
Office of the Press Secretary
June 26, 2006

THE PRESIDENT: Glad you're here. Thank you all. Welcome to the White House, and thank you for joining us as we celebrate Black Music Month.

I wish Laura were here, but she's got a good excuse. She's in New Orleans. She went down there to talk to the American Library Association's Annual Conference, and she spoke about the importance of rebuilding school libraries up and down the Gulf Coast of our country. She sends her best. I wish she could be here to hear the music. I know she's going to love it as much as I will love it. 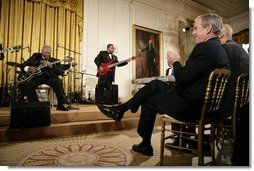 I'm looking forward to introducing our artists here in a second. I do want to recognize Alphonso Jackson, who's a member of my Cabinet. Thank you for coming and thank you for bringing us here -- (applause.) And it's good to see the federal coordinator for the Gulf Coast rebuilding effort, Don Powell. Thank you for being here, sir. (Applause.) I welcome Chip Pickering from Mississippi, and Congresswoman Marsha Blackburn from Tennessee. Thank you both for coming, I'm proud you're here. (Applause.)

It is always a special treat to be in the presence of Dr. Dorothy Height. Good to see you, Dr. Height. (Applause.) And with us we have two great athletes, Alana Beard -- thank you for coming, Alana -- and Kareem Abdul Jabbar. Proud you're here. (Applause.)

I don't know whether you know this, but Kareem Abdul Jabbar is a jazz expert, and he is working on a documentary about the connection between jazz and basketball. (Laughter.) Pretty good combination. (Laughter.)

During this month, we recognize the great contributions that black music has made to our nation. That's why we're here. We express our gratitude to the artists whose works have inspired our nation and have brought such beauty into the world.

Black music was often born of great pain, from the music of slaves who sang to warn others that the master was coming, to the music of faith that helped African Americans endure tremendous suffering and overcome injustice. Black music is a really important part of our nation's history and culture, and that's why we're celebrating it here today. (Applause.)

Some of the finest performances by black musicians have been heard right here in the White House, and we're going to continue that tradition today. During -- in 1878, during the administration of Rutherford B. Hayes, soprano Marie Seilka became the first black artist to perform here in the White House. A few years later, the Jubilee Singers of Fisk University became the first black choir to perform here. They moved President Chester Arthur to tears with a rendition of "Safe in the Arms of Jesus." Like the man they sang about, the Jubilee Singers could not find an inn that would welcome them here in Washington, D.C. Those times have changed, thank goodness. 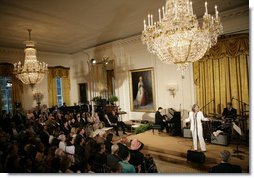 In more recent times, the White House has been graced by performances by artists like Louis Armstrong and Pearl Bailey, Ella Fitzgerald, Aretha Franklin, Shirley Caesar, Duke Ellington, and Lionel Hampton. These men and women created some of the greatest music America has ever produced, and they honored our country by sharing their gifts right here in the people's house. We're about to have the same type of performances here -- if I can ever quit talking. (Laughter.)

This year Black Music Month celebrates the music of our nation's Gulf Coast, soul and blues and jazz. And I'm honored that we've got three tremendous performers who represent the best of these three great traditions.

Patti Austin is one of America's most talented singers and songwriters. Her extraordinary career began at the age of four, when she made her debut alongside her godmother, Dinah Washington, at Harlem's famed Apollo Theater. Since then, she's recorded 16 solo albums, featuring everything from soul to standards. Recently Patti earned her sixth Grammy nomination with her tribute to Ella Fitzgerald. Patti is an incredible artist. Laura and I have been privileged to see her perform at the Kennedy Center. I think you're going to like her a lot. (Laughter.) She's sung at the White House for every President since Ronald Reagan.

When she was rehearsing her performance for President Reagan, Patti was singing so powerfully a piece of molding fell from the ceiling here in the East Room. (Laughter.) Be forewarned. (Laughter.) When Patti sings, she brings down the house. (Laughter.) I'm proud to join the distinguished line of Presidents who have welcomed her here to the White House.

With us today is B.B. King, "King of the Blues." (Applause.) B.B. was raised in the Mississippi Delta, where he picked cotton for 35 cents a day, and then he played after work on the street corners for dimes. He says that when he sang gospel songs, "They'd pat me on the head, but wouldn't ever put anything in the hat." (Laughter.) So he would change, "my Lord" to "my baby" -- (laughter) -- and then they always gave him a tip. (Laughter.)

One night in the 1950s, B.B. King was playing in an Arkansas town called Twist when two men got in a fight over a woman and knocked over a kerosene stove and set the whole place on fire. B.B. got out, but then he realized he had left his guitar behind. And so he went back inside, he braved the flames, and he rescued the guitar. Later, he learned that the lady who had inspired the brawl was named Lucille. So that's what he named his guitar. 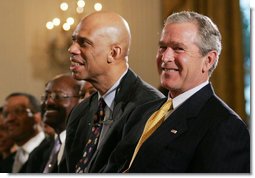 Since then, B.B. and Lucille have played more than 10,000 shows. They have thrilled audiences all over the world. B.B. has notched an incredible 74 entries on the Billboard charts, and his work has influenced virtually every major guitar player over the last half-century. He remains gracious and humble, what folks in Mississippi call, "free-hearted."

B.B. says this about his career: "I'm trying to get people to see that we are our brother's keeper." He went on to say, "Red, black, brown, yellow, rich or poor, we all have the blues." It's hard to have the blues when you're about to hear B.B. King perform. At 80, this ageless star is still going strong, and we are thrilled to welcome him back to the White House. (Applause.)

Last year as Hurricane Katrina roared through New Orleans, the rising water took his dad, Irvin, Sr. The pain of losing his father was suddenly unimaginable. Yet in his father's name, Irvin pushed back his grief and he went to work. He pulled out his trumpet, he pulled together his orchestra and started performing to help others who had lost homes and loved ones. He helped dry New Orleans' tears through the inspiring power of his music, and he hasn't stopped.

He's using his God-given talent to help rebuild his beloved homeland -- his hometown, one brick and one note at a time. After the storm, Irvin made this solemn vow: No breached levee will wash away at culture of New Orleans.

There's a wonderful and unique tradition in New Orleans called the jazz funeral. The funeral procession parades slowly through the streets, followed by a band playing a mournful dirge as it moves to the cemetery. Once the casket has been laid in place, and the mourners have moved out of the cemetery, the music begins to speed up and the procession is joined by a joyful second line, with crowds of people dancing and celebrating the triumph of spirit over death.

Today, Irvin Mayfield will play a song in the great tradition called, Just a Closer Walk With Thee. It's the first song he learned from his dad. He played it at his dad's -- in his dad's memory after Hurricane Katrina, and then he retired the song. We're honored that he's decided to play it one last time, right here in the White House.

Irvin, we thank you for your personal courage and your dedication to others in a time of adversity. I have no doubt that with every good deed you perform and every note you play, your dad is smiling down on you. God bless you, Irvin.