For Immediate Release
Office of the Press Secretary
June 26, 2006

THE PRESIDENT: I have just had a remarkable discussion with some of my fellow citizens who have dedicated their lives to making sure our troops know that this country supports them as they help secure our country and spread freedom.

One of the amazing things about America is that people are desirous of coming together to support a neighbor in need. And we've got kids who are overseas defending this country, and we've got people at this table who are supporting their families, their loved ones, and most importantly, the troops that are in harm's way. 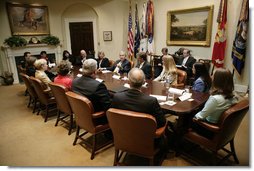 There's an organization called America Supports You. I would hope my fellow citizens would like on the webpage, AmericaSupportsYou.mil, to determine how you can help support our troops if you so desire. I would urge Americans to do that, and around the table are leaders of the different organizations that make up this umbrella group. We've heard from people that are helping families of the wounded. We're talking to people who are using their position in different fields, like the entertainment field, to go over and provide hope for our troops. We're talking to moms and wives of those who have volunteered to serve our country.

But I want to thank you all for joining us, and thank you for serving your country. I told the folks here that the politics in Washington can be rough. But make no mistake about it, I am determined to succeed. And we will implement a plan to achieve victory, which is necessary, and that they need to tell the troops that no matter how tough it looks here in the nation's capital, that I know we're doing the right thing, and I know we will win.

Q Mr. President, General Casey saw you on Friday, and it's been reported that he's talked about withdrawing two brigades from Iraq by this year. Can you tell us what he recommended to you?

THE PRESIDENT: First of all, I did meet with General Casey, and I met with him because it's very important for me, as well as Secretary Rumsfeld, to meet with our commander on the ground. I've told the American people our commanders will be making the decisions as to how to achieve victory, and General Casey, of course, is the lead person. So we had a good visit with him.

And we talked about a lot of things. The first thing we talked about was the joint operations with the Iraqi forces to secure Baghdad and how that's going. We talked about the actions we're taking in Ramadi. The coalition is in the lead in Ramadi, and we're trying to make sure Ramadi does not become a safe haven for al Qaeda. And so he explained to me the tactics on the ground, what we're doing to secure that city and to run the al Qaeda-types out.

And so I did visit with General Casey, and I came away once again with my trust in that man. I've told the people here around the table that the decisions that I will make will be based upon the recommendations of people like General George Casey.

Q Mr. President, how much closer do you believe North Korea is to launching the long-range missile, and how concerned are you about this? What if they just launch a satellite --

So we don't know. We don't know. That's part of the problem. It's a nontransparent society that ought to be sharing its intentions with the rest of the world.

Q I know you are not planning to see Al Gore's new movie, but do you agree with the premise that global warming is a real and significant threat to the planet that requires action --

THE PRESIDENT: I think -- I have said consistently that global warming is a serious problem. There's a debate over whether it's manmade or naturally caused; we ought to get beyond that debate and start implementing the technologies necessary to enable us to achieve a couple of big objectives -- one, be good stewards of the environment; two, become less dependent on foreign sources of oil for economic reasons and for national security reasons.

That's why we're pressing for clean coal technology. That's why the hydrogen initiative is robust. In other words, we want our children being able to drive cars not fueled by gasoline, but by hydrogen. That's why I've been a strong advocate of ethanol as an alternative source of fuel to run our cars. I strongly believe that we ought to be developing safe nuclear power. The truth of the matter is if this country wants to get rid of its greenhouse gases we've got to have the nuclear power industry be vibrant and viable. And so I believe in -- and I've got a plan to be able to deal with greenhouse gases.

Q Mr. President, what are you doing to ensure that the Voting Rights Act is reauthorized by the midterm elections, as you're saying that's one of your top priorities? And also, do you support foreign ballots -- foreign language ballots?

THE PRESIDENT: I am working very carefully with members of Congress to implement that which I said when I signed the proclamation for Rosa Parks, is I want this Voting Rights Act extended. And so we're working with members of the United States Congress to see if we can't get it done.

Q Sir, several news organizations have reported about a program that allows the administration to look into the bank records of certain suspected terrorists. My questions are twofold: One, why have you not gone to Congress to ask for authorization for this program, five years after it started? And two, with respect, if neither the courts, nor the legislature is allowed to know about these programs, how can you feel confident the checks and balances system works?

THE PRESIDENT: Congress was briefed. And what we did was fully authorized under the law. And the disclosure of this program is disgraceful. We're at war with a bunch of people who want to hurt the United States of America, and for people to leak that program, and for a newspaper to publish it does great harm to the United States of America. What we were doing was the right thing. Congress was aware of it, and we were within the law to do so.

The American people expect this government to protect our constitutional liberties and, at the same time, make sure we understand what the terrorists are trying to do. The 9/11 Commission recommended that the government be robust in tracing money. If you want to figure out what the terrorists are doing, you try to follow their money. And that's exactly what we're doing. And the fact that a newspaper disclosed it makes it harder to win this war on terror.