For Immediate Release
Office of the Press Secretary
June 22, 2006

THE PRESIDENT: Thank you very much. Jó napot kívánok. (Applause.) Thank you for your warm welcome. I first want to thank the President for his gracious hospitality and the chance to visit Sándor Palace. It's a beautiful site, and I know you're proud of it. I also want to thank your Prime Minister for his hospitality and the chance to go to the Parliament Building. Laura and I particularly liked to see the Holy Crown of St. Stephen. It was beautiful. It's a grand reminder of the great history of Hungary. 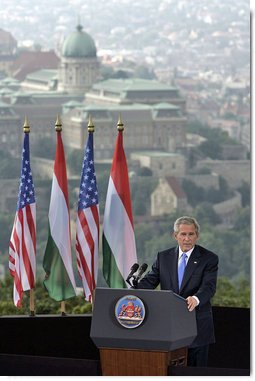 I thank the Hungarian people for their gracious reception. Laura and I are honored to visit your great nation. Hungary sits at the heart of Europe. Hungary represents the triumph of liberty over tyranny, and America is proud to call Hungary a friend.

I appreciate the opportunity to stand here on Gellért Hill, which offers a striking view of your beautiful city. Fifty years ago, you could watch history being written from this hill. In 1956, the Hungarian people suffered under a communist dictatorship and domination by a foreign power. That fall, the Hungarian people had decided they had had enough and demanded change. From this spot you could see tens of thousands of students and workers and other Hungarians marching through the streets. They called for an end to dictatorship, to censorship, and to the secret police. They called for free elections, a free press, and the release of political prisoners. These Hungarian patriots tore down the statue of Joseph Stalin, and defied an empire to proclaim their liberty.

Twelve days after the Hungarian people stood up for their liberty, the communists in Moscow responded with great brutality. Soon the streets of Budapest were filled with Soviet tanks. The Red Army killed many who resisted, including women and children. The Soviets threw many more into prison. They crushed the Hungarian uprising, but not the Hungarian people's thirst for freedom.

Some 200,000 Hungarians fled into exile in search of liberty. Many found refuge in the United States. These immigrants have contributed to my country in countless ways, and America will always be glad that we opened our doors to Hungarians that were seeking freedom. Fifty years later, the sacrifice of the Hungarian people inspires all who love liberty. Some of those who faced those tanks are here today. I had the honor of meeting three such gentlemen at lunch. I was proud to be in their presence. America honors your courage. We've learned from your example, and we resolve that when people stand up for their freedom, America will stand with them.

In 1989, a new generation of Hungarians returned to the streets to demand their liberty, and boldly helped others secure their freedom, as well. By giving shelter to those fleeing tyranny and opening your border to the West, you helped bring down the Iron Curtain, and gave the hope of freedom to millions in Central and Eastern Europe. Because you had the courage to lead, Hungary became the first communist nation in Europe to make the transition to democracy. 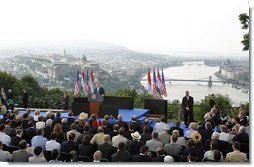 Hungary has continued to move forward. You regained your independence, held free elections, and established a free economy. Hungary is now a valued member of NATO and the European Union. You know that the democratic journey is not easy, but you continue to make the tough decisions that are necessary to succeed. America admires your perseverance, we welcome your progress, and America values our alliance with the free people of Hungary.

You believe that free nations have an obligation to help others realize the benefits of freedom. So last year, you launched the International Center for Democratic Transition here in Budapest. You set that center up to help others learn from your country's experiences. Hungary was also an early contributor to the United Nations Democracy Fund, which supports emerging democracies with legal and technical and financial assistance. And together, America and Hungary helped launch the Foundation for the Future, which supports democratic reformers, independent journalists, women's groups, and human rights advocates throughout the Middle East. Hungary is making a difference in our world, and I thank you for your leadership in freedom's cause.

Hungary is also showing courage in freedom's cause. In Kosovo, Hungarian soldiers are helping to secure the peace. Your work is aiding the rise of democracy in a region that has endured violence and tyranny for many decades. By your efforts, you're helping the people of the Balkans establish free and democratic societies, and you're paving the way for their membership in the institutions of a united Europe.

Hungarian troops are also defending freedom's cause in the war on terror. In Afghanistan, your soldiers have rebuilt schools and a medical center. They've helped train Afghan police to enforce the rule of law, and to protect the Afghan people. In Iraq, Hungarian troops played a vital role in Operation Iraqi Freedom by providing security and delivering food and medical supplies to coalition forces. Today, Hungarian soldiers are helping to train Iraqi security forces. This is important work. By supporting these two young democracies, you are strengthening two new allies in the war on terror, and you're bringing hope to millions of people in a vital region of the world.

Last week, I traveled to Baghdad. I was impressed by what I saw. Americans and Hungarians, and other coalition partners can be proud of what we have achieved in partnership with the Iraqi people. I met with Iraq's new Prime Minister, and was able to see firsthand his strong character, his commitment to freedom, and his determination to succeed. Hungarians will recognize this spirit: Prime Minister Maliki is committed to the democratic ideals that also inspired Hungarian patriots in 1956 and 1989. He has a sound plan to improve security, to unify his people, and to deliver a better life for the citizens of Iraq. The success of the new Iraqi government is vital to the security of all nations, and so it deserves the support of the international community. We will continue to help the Iraqi government establish free institutions, to achieve its goals, and we will continue to help Iraq take its rightful place alongside America and Hungary as beacons of liberty in our world.

Iraq's young democracy still faces determined enemies, people who will use violence and brutality to stop the march of freedom. Defeating these enemies will require sacrifice and continued patience -- the kind of patience the good people of Hungary displayed after 1956. We will help them rebuild a country destroyed by a tyrant. We'll help the Iraqis defeat the enemies of freedom. Our commitment is certain, our objective is clear. The new Iraqi government will show the world the promise of a thriving democracy in the heart of the Middle East.

The Hungarian people know well the promise of freedom. Many of you lived through the nightmare of fascism, or communism, or both. Yet you never lost hope. You kept faith in freedom. And 50 years after you watched Soviet tanks invade your beloved city, you now watch your grandchildren play in the streets of a free Hungary.

The lesson of the Hungarian experience is clear: Liberty can be delayed, but it cannot be denied. The desire for liberty is universal, because it is written by our Creator into the hearts of every man, woman, and child on this Earth. And as people across the world step forward to claim their own freedom, they will take inspiration from your example, and draw hope from your success.

Earlier today Laura and I laid a bouquet of flowers at the 1956 Memorial Monument across the river. It was our privilege to do so. It was a moving moment for us. Kossuth Square is named for the father of Hungarian democracy, and honors more than a century-and-a-half of Hungarian sacrifice in freedom's cause.

A bust of this great leader stands in the U.S. Capitol. It affirms that those who fight for liberty are heroes not only in their own land, but of all free nations. All who love liberty are linked together across the generations, and across the world.

Your great poet Petofi said this:

"Here is the time, now or never!
Shall we be slaves or free?
This is the question, answer!
By the God of the Hungarians we swear,
We swear to be slaves no more!"

These words were addressed to the Hungarian people, yet they speak to all people, in all times. This is the spirit that we honor today. I appreciate the opportunity to come to this great country and to celebrate the Hungarian example -- the courage, the sacrifice, the perseverance that has led to this democracy.

On behalf of all Americans: Köszönöm. May God bless you all. Thank you very much. (Applause.)