For Immediate Release
Office of the First Lady
June 22, 2006

MRS. BUSH: Well, let me say that I also want to congratulate you for making such huge strides in such a short amount of time. We all know that the most important way we can treat breast cancer is with early detection. And breast cancer is something that women were embarrassed to talk about, really didn't even want to think about, denied; and because of that, many times got help too late and died of it. 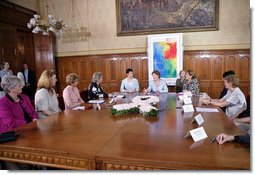 But now, because women have started speaking out around the world, and a lot of it does have to do with Nancy Brinker, your former ambassador, who, when she started the Komen Foundation in the United States, no women in the United States would talk about breast cancer. They didn't get their mother and sister and go have a mammogram. A lot of the things, the big fundraisers, the big breast cancer lunches, the runs, the Race for the Cure, all of those events that the Komen Foundation started 25 years ago in the United States made breast cancer something that it was all right to talk about. And when that happened, then women knew to go get a mammogram or see their doctor or do breast self-exams.

So, I visited Hungary a few years ago when Nancy Brinker was here, and she and I went to a breast cancer care center together. And I want to congratulate the women of Hungary for bringing this topic out into the open so that so many women have been able to take charge of their own health and have early detection, which really, then, has saved their life.

So thank you. I know that each one of you at this table have worked to make that happen, and I want to congratulate you and thank you very much.