For Immediate Release
Office of the First Lady
June 16, 2006

Mrs. Bush's Remarks After Attending Tomás and the Library Lady
Boys and Girls Club of the East Valley
Guadalupe, Arizona

MRS. BUSH: This is a very interesting story because it's true, about the real Tomás Rivera, who learned to read at a library in Iowa because he went in every day and he could get books and the library lady was really nice to him and helped him learn to read, and he helped her learn to speak Spanish. 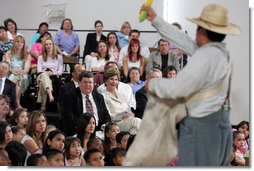 So the story -- do you get what the message is that we're hoping all of you understand? And that is to go to the library, spend some time at the library. (Applause.)

The woman that wrote this book, Tomás and the Library Lady, Pat Mora, lives in Santa Fe, New Mexico now. She writes a lot of books. I hope maybe -- I bet the Arizona library, the Maricopa library probably will have Pat Mora come sometime. So if she does, I hope you all can go meet her and see what she's like.

This is a really great example of a collaboration between the library system and a project like Childsplay. You heard at the very first the director of Childsplay saying how they were funded, which is a very American way, like he said, through government funding, through the National Endowment for the Arts, local philanthropy, local government funding through the library district, and what happens if they can get the message out to lots and lots of kids about how important reading is and how important libraries are.

Q Mrs. Bush, what did you like best about the story?

MRS. BUSH: I love this story because I think it's just a wonderful story of our country, really, of the opportunities that people can have, of the ways that people like the library lady made an effort to help people who were in Iowa. And the way the family is loving. The Papa Grande tells the story that influences these children so that they want to read stories. And the care that you obviously see that the mother and the dad have for the children and wanted to make sure they were in school.

And the way the teacher was was really the way they were in the late '30s, or early '40s, in a lot of -- certainly in Texas, and I'm sure other border states where Spanish was not allowed in the school.

Q Mrs. Bush, what was your favorite part of the visit to Arizona today?

MRS. BUSH: Well, I loved this. I loved having the chance to see this play. I've known about it for a long time. Tim had told me about it. And I knew that the next time I came to Arizona I would -- hoped I'd be able to see this. And it was really fun to get to watch with all of these kids. They're so cute. Did you see the dancers that are dressed here, that danced when we came in? So it was great getting a chance to be here.