For Immediate Release
Office of the Press Secretary
June 15, 2006

THE PRESIDENT: Thank you all. Please be seated. Thank you all for coming. In a few moments, I will sign the Broadcast Decency Enforcement Act. This is a good bipartisan bill. It's going to help American parents by making broadcast television and radio more family-friendly.

I appreciate the many citizens groups who are here, and I want to thank the members of Congress who worked hard to get this bill passed. And I'm looking forward to signing it into law. 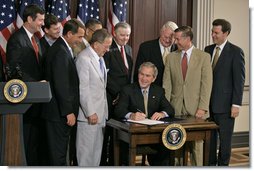 I want to thank Kevin Martin, who's the Chairman of the Federal Communications Commission, and I want to thank the other commissioners who are here today.

The bill sponsor is with us, Fred Upton from the state of Michigan. Thanks for coming, Fred. I appreciate Congressman Bobby Rush from the state of Illinois, Chip Pickering from Mississippi, and Joe Pitts from Pennsylvania.

Every day our nation's parents strive to raise their children in a culture that too often produces coarse, vulgar and obscene entertainment. In our free society, parents have the final responsibility over the television shows that their children watch, or the websites they visit, or the music they listen to. That's a responsibility of moms and dads all across the country, to make sure their children are listening to or watching the right kind of programming.

The best way to do that is for parents to be vigilant, pay attention to what their children are doing. One thing they can do if they're worried about people watching a bad program is turn off the TV. That's why they put the "on"-"off" button there. (Laughter.) Parents are the first line of defense, but broadcasters and the electronics industry must play a valuable role in protecting our children from obscene and indecent programming.

They provide the tools that empower parents to make good decisions, which is voluntary rating systems and the V-chip. And we applaud those. Broadcasters also have a duty to respect common decency, to take into account the public interest and to keep the public airwaves free of indecent material, especially during the hours when children are most likely to be watching and listening.

Unfortunately, in recent years, broadcast programming has too often pushed the bounds of decency. One study found that during the hours between 8:00 p.m. and 9:00 p.m. -- that's the time when most families are watching television -- the use of profanity on television shows increased vulgar language by 95 percent, from '88 to -- from 1988 to 2002. In other words, the language is becoming coarser during the times when it's more likely children will be watching television. It's a bad trend, a bad sign. Since 2000, the number of indecency complaints received by the FCC has increased from just hundreds per year to hundreds of thousands. In other words, people are saying, we're tired of it, and we expect the government to do something about it.

And so we believe we have a vital role to play. We must ensure that decency standards for broadcasters are effectively enforced. That's the duty of the FCC. That's why we've got the Chairman standing right here, which he understands. (Laughter.) It's the duty of the FCC to impose penalties on broadcasters and stations that air obscene or indecent programming. It's one of their responsibilities. People expect us to adhere to our responsibilities. He's a part of the executive branch. And since I'm the head of the executive branch, I take responsibility, as well, for putting people in place at the FCC who understand one of their jobs, and an important job, is to protect American families.

The problem we have is that the maximum penalty that the FCC can impose under current law is just $32,500 per violation. And for some broadcasters, this amount is meaningless. It's relatively painless for them when they violate decency standards. And so the Congress decided to join the administration and do something about it.

And so the bill I'm about to sign, the Broadcast Decency Enforcement Act, increases tenfold the penalty that the FCC can impose, to $325,000. The Congress got serious. And I appreciate their hard work on this measure.

The legislation does not change the broadcast decency standards that are already on the books. What the legislation does is it gives the FCC the means to enforce them more effectively. By allowing the FCC to levy stiffer and more meaningful fines on broadcasters who violate decency standards, this law will ensure that broadcasters take seriously their duty to keep the public airwaves free of obscene, profane and indecent material. American families expect and deserve nothing less.

And so I'm going to ask the members of Congress who have worked hard on this piece of legislation to join me. I congratulate you for your good work. Thank you for coming. May God bless you. (Applause.)