For Immediate Release
Office of the Press Secretary
June 13, 2006

PRESIDENT BUSH: Mr. Prime Minister, thank you for this opportunity to visit with your cabinet. I have expressed our country's desire to work with you, but I appreciate you recognizing the fact that the future of this country is in your hands. The decisions you and your cabinet make will be determinate as to whether or not a country succeeds that can govern itself, sustain itself, and defend itself. I'm impressed by the cabinet that you've assembled. You've assembled people from all parts of your country, representing the different religions and the different histories and traditions. 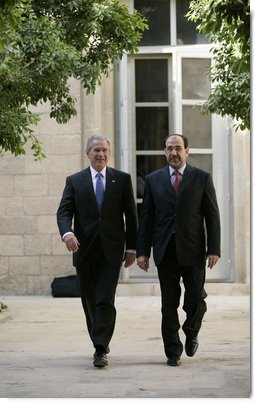 And yet the cabinet here represents the entire Iraqi people, and I appreciate your commitment to representing the people of Iraq. I'm impressed by the strength of your character and your desire to succeed. And I'm impressed by your strategy. We've discussed -- I discussed earlier with the Prime Minister and here with his cabinet and with members of my Cabinet the strategy necessary to have a country that is capable of answering to the needs of the people.

We discussed the security strategy. We discussed an economic strategy, a reconstruction strategy. And all of it makes sense to me. And so I've come to not only look you in the eye, I've also come to tell you that when America gives its word, it will keep its word; that it's in our interests that Iraq succeed. It's not only in the interests of the Iraqi people, it's in the interests of the American people and for people who love freedom.

Iraq is a part of the war on terror. Iraq is a central front on that war, and when Iraq succeeds in having a government of and by and for the people of Iraq, you will have dealt a serious blow to those who have a vision of darkness, who don't believe in liberty, who are willing to kill the innocent in order to achieve a political objective.

And so, Mr. Prime minister, I want to thank you for giving me and my Cabinet a chance to hear from you personally and a chance to meet the members of this team you've assembled. It's an impressive group of men and women, and if given the right help, I'm convinced you will succeed, and so will the world. 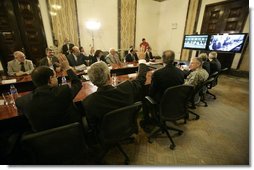