For Immediate Release
Office of the Press Secretary
June 12, 2006 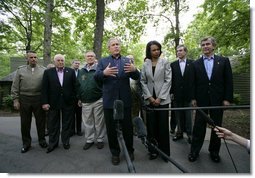 As you can see, I not only have my national security team here, I've got members of my Cabinet, as well. We all agree that we have got to continue to help this new government move forward. Success in Iraq will depend upon the capacity of the new government to provide for its people. We recognize that. We're encouraged by the formation of a unity government, and we recognize our responsibilities to help that new government.

And tomorrow we'll be meeting with the new government via SVTS (Secure Video Teleconference System), and that will be a very interesting experience for all of us, to be able to talk to our respective counterparts.

So I want to thank my Cabinet Secretaries for being with me today, and other members of my team, to really have this very vital and important discussion.

I'll answer a couple of questions.

Q You said that you were going to listen to your U.S. commanders on the ground about the troops. And, you know, General Casey has said now that he thinks that gradual U.S. troop reductions could be made in the coming months. So do you agree with this?

THE PRESIDENT: Well, as I also said the last time you asked me this question -- which was a couple of days ago -- that we were going to make sure that we fully understand the Iraqi capability to be able to take the fight to the enemy and secure its country. And the Iraqi Defense Minister is just in office. And General Casey, of course, will be making those assessments, as he told us today via the teleconference -- that he will make the proper assessments and come back to us and make recommendations to us.

Whatever we do will be based upon the conditions on the ground. And whatever we do will be toward a strategy of victory. And so this is a process of getting to know the -- understand the Iraqi capabilities, particularly the command and control structure, and what we need to do to help them achieve victory.

Q Mr. President, what do you think of the successor to Zarqawi that was named by al Qaeda? And how do you stop an insurgency that is still able to recruit people and continue to threaten attacks?

THE PRESIDENT: I think the successor to Zarqawi is going to be on our list to bring to justice.

What was the second part of your question?

Q How do you stop an insurgency that continues to be able to recruit people and continues to threaten attacks and carry them out?

THE PRESIDENT: The best way to win this war against an insurgency is to stand up a unity government which is capable of defending itself, but also providing tangible benefits to the people. The Iraqis have got some wonderful assets: They've got energy, which they can use to benefit their people; they're entrepreneurial; they've got a stable currency; they've got a small business sector that's growing. And, ultimately, the Iraqi people are going to have to make up their mind, do they want to live in terror, or do they want to live in peace. And the United States and our coalition will help them realize their ambitions if they choose to live in peace and hope, which we believe they will.

Remember, it wasn't all that long ago that 12 million people went to the polls and said, we want to live in a free society. No question, the fighting is tough. No question, the enemy is violent and mean. But the enemy doesn't stand for anything. They have no message of hope. They have no positive philosophy. All they can do is kill and hope that the government splits up, or that the American people lose their will. And I keep reminding the American people that the stakes are worth it. It is worth it to help Iraq succeed. It is worth it to have a democracy in the Middle East. It is worth it to show other reformers and people who want to live in a free society what is possible.

Q Are you satisfied with what Iraq's neighbors and the international community are doing to help this new government, or would you like to see them do more, and what should it be?

THE PRESIDENT: Iraq's neighbors ought to do more to help them. And we're constantly working with our friends in the neighborhood to encourage them to support this new democracy. And I recognize that there's some concerns about a Shia Prime Minister and a -- from different countries where there's Sunni representation, Sunni leadership. But our message is, is that Iraq will show that it's possible for people of all faiths to live together. After all, they've got the most modern constitution in the history of the Middle East.

We expect our friends who have made commitments, $13 billion, to honor those commitments. Many of those countries are outside of the Middle East. And so we'll continue -- we discussed that today, as to how to continue to rally not only the neighborhood, Iraq's neighbors to the cause of the new democracy, but how to help others who have made a pledge to honor their pledge.

Q Mr. President, did you talk about oil production and maybe getting it back to prewar levels, or anything?

THE PRESIDENT: We did. We spent a lot of time in talking about energy and oil. The oil belongs to the Iraqi people. It's their asset. It is one of the -- the capacity to generate wealth from the ground distinguishes Iraq from Afghanistan, for example. It's something that I view as a very positive part of Iraqi future. And we talked about how to advise the government to best use that money for the benefit of the people.

Secondly, obviously, we spent time figuring out how to help strategize with the new ministries as to how to get oil production up. And recently, they've had oil production as high as a little over 2 million barrels a day, which is extremely positive. The oil sector is very much like the rest of the infrastructure of Iraq. Saddam Hussein let it deteriorate. There wasn't much reinvestment, or not much modernization. After all, he was using the money for his own personal gain and he wasn't spending the people's money on enhancing the infrastructure. And the oil infrastructure collapsed and deteriorated. And as a result, there's a lot of work that needs to be done on, for example, work-overs -- that is to help oil wells become revitalized, just a standard maintenance procedure. So there's a maintenance program on to help the Iraqi people get their production up.

There's some unbelievably interesting exploration opportunities. And the new government is going to have to figure out how best to lease the people's lands in a fair way. My own view is, is that the government ought to use the oil as a way to unite the country and ought to think about having a tangible fund for the people, so the people have faith in central government.

Listen, thank you all for coming today. And tomorrow is going to be a fascinating day, and I'm looking forward to having discussions with our counterparts via SVTS. Thank you.