For Immediate Release
Office of the Press Secretary
June 12, 2006

THE PRESIDENT: I want to thank Generals Abizaid and Casey, as well as Ambassador Khalilzad for the last -- for the briefing for the last three hours. I thought your assessment of the situation in Iraq was very realistic. I think your recommendations to us on how to win in Iraq, to have an Iraq that can govern itself, sustain itself and defend itself are -- your recommendations are valid.

I look forward to continuing to visit with you later on this afternoon about how we can help this new government succeed. Zal, you've been -- I just want to thank you all very much for remaining in theater and working as hard as you are. You're making a significant difference.

And again, please give my best congratulations to the troops on the ground for bringing Zarqawi to justice. I fully recognize that's not going to end the war. On the other hand, it was a major blow to al Qaeda and the killers and terrorists that are trying to spread violence and suffering, and stop the emergence of a new democracy.

Zal, we left off where you were talking about the way forward in Iraq, and your perception of this new government. 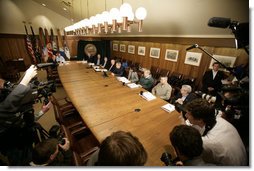