For Immediate Release
Office of the Press Secretary
June 8, 2006 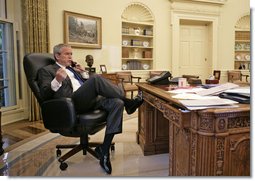 Zarqawi was the operational commander of the terrorist movement in Iraq. He led a campaign of car bombings, assassinations and suicide attacks that has taken the lives of many American forces and thousands of innocent Iraqis. Osama bin Laden called this Jordanian terrorist "the prince of al Qaeda in Iraq." He called on the terrorists around the world to listen to him and obey him. Zarqawi personally beheaded American hostages and other civilians in Iraq. He masterminded the destruction of the United Nations headquarters in Baghdad. He was responsible for the assassination of an American diplomat in Jordan, and the bombing of a hotel in Amman.

Through his every action, he sought to defeat America and our coalition partners, and turn Iraq into a safe haven from which al Qaeda could wage its war on free nations. To achieve these ends, he worked to divide Iraqis and incite civil war. And only last week he released an audio tape attacking Iraq's elected leaders, and denouncing those advocating the end of sectarianism.

Now Zarqawi has met his end, and this violent man will never murder again. Iraqis can be justly proud of their new government and its early steps to improve their security. And Americans can be enormously proud of the men and women of our armed forces, who worked tirelessly with their Iraqi counterparts to track down this brutal terrorist and put him out of business.

The operation against Zarqawi was conducted with courage and professionalism by the finest military in the world. Coalition and Iraqi forces persevered through years of near misses and false leads, and they never gave up. Last night their persistence and determination were rewarded. On behalf of all Americans, I congratulate our troops on this remarkable achievement.

Zarqawi is dead, but the difficult and necessary mission in Iraq continues. We can expect the terrorists and insurgents to carry on without him. We can expect the sectarian violence to continue. Yet the ideology of terror has lost one of its most visible and aggressive leaders.

Zarqawi's death is a severe blow to al Qaeda. It's a victory in the global war on terror, and it is an opportunity for Iraq's new government to turn the tide of this struggle. A few minutes ago I spoke to Prime Minister Maliki. I congratulated him on close collaboration between coalition and Iraqi forces that helped make this day possible. Iraq's freely elected Prime Minister is determined to defeat our common enemies and bring security and the rule of law to all its people.

Earlier this morning he announced the completion of his cabinet appointments, with the naming of a new Minister of Defense, a new Minister of the Interior, and a new Minister of State for National Security. These new ministers are part of a democratic government that represents all Iraqis. They will play a vital role as the Iraqi government addresses its top priorities -- reconciliation and reconstruction and putting an end to the kidnappings and beheadings and suicide bombings that plague the Iraqi people. I assured Prime Minister Maliki that he will have the full support of the United States of America.

On Monday I will meet with my national security team and other key members of my Cabinet at Camp David to discuss the way forward in Iraq. Our top diplomats and military commanders in Iraq will give me an assessment of recent changes in the political and economic and security situation on the ground. On Tuesday, Iraq's new Ambassador to the United States will join us, and we will have a teleconference discussion with the Prime Minister and members of his cabinet. Together we will discuss how to best deploy America's resources in Iraq and achieve our shared goal of an Iraq that can govern itself, defend itself and sustain itself.

We have tough days ahead of us in Iraq that will require the continued patience of the American people. Yet the developments of the last 24 hours give us renewed confidence in the final outcome of this struggle: the defeat of terrorism threats, and a more peaceful world for our children and grandchildren.

May God bless the Iraqi people and may God continue to bless America.