For Immediate Release
Office of the First Lady
June 8, 2006

MRS. BUSH: Thank you, Ambassador Tobias, for your kind introduction, and for the good work that you're doing at USAID, as well as our nation's first Director of U.S. Foreign Assistance. I also want to acknowledge the President of the World Bank Group, Mr. Paul Wolfowitz, who is here with us today. Thank you very much for joining us. Congressman Chris Smith, U.S. Representative from New Jersey is here. Congressman, thank you for joining us. Congressman Smith has been an advocate for each one of these very important humanitarian efforts of the United States government. Thank you so much, Chris. 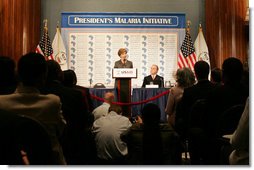 I think Ambassador Jendayi Frazier has not gotten here yet. And Dr. Hill, thank you very much. Dr. Hill is the Assistant Administrator for Global Health, Acting Malaria Coordinator. Thank you, Dr. Hill.

And I also want to recognize the children from the St. Catherine Laboure School's Cultural Heritage Choir. I can see you over there dressed in your Cultural Heritage Costumes, and I wish I could have heard you sing. But I think you performed beautifully.

Today, I'm delighted to join all of you, distinguished ambassadors, business leaders, researchers, representatives of NGOs and government officials at a hopeful moment in our fight against malaria.

One year ago, my husband called on developed countries, private foundations, and volunteer organizations to partner with African countries to dramatically reduce the suffering and death caused by this disease. To help meet that challenge, he announced the President's Malaria Initiative -- a five year, $1.2 billion program to combat malaria in 15 of the hardest-hit nations.

Just one year into the initiative, we've seen a swift response, from private foundations, as well as the Corporate Alliance on Malaria in Africa, private companies that have dedicated millions of dollars to prevention and treatment. By the end of September, through early PMI partnerships with the first three focus countries, aid from the American people will have reached about six million Africans.

These initial successes are encouraging, but much work remains. Malaria kills 3,000 children in Africa every day -- and claims 1.2 million lives every year. The disease is especially devastating for those who are already vulnerable: children, pregnant women, and people infected with HIV/AIDS. 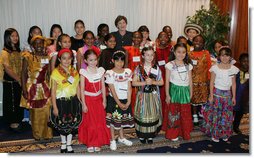 Over the decades, science and technology advanced. Malaria was eradicated in the United States. The challenge now is to make sure this progress benefits people still at risk of malaria. And using new science and technology in partnership with the first three PMI focus countries -- Angola, Tanzania, and Uganda -- PMI treatment and prevention resources are already saving lives.

In Tanzania, PMI distributed 130,000 long-lasting, insecticide-treated nets, doubling the coverage for pregnant women and young children in the Zanzibar area. In Angola -- where almost 90 percent of the population is at risk of contracting malaria -- PMI resources supported a spraying program that has protected more than 500,000 people.

In Uganda -- where almost 100,000 people a year die from malaria -- PMI is distributing more than 200,000 free bed nets and 300,000 doses of life-saving malaria drugs to children and pregnant women in refugee camps. And beginning this month, PMI resources will support a spraying program that will protect half-a-million Ugandans against mosquitoes.

Today I'm delighted to announce that the United States will partner with four more focus countries: Malawi, Mozambique, Rwanda, and Senegal. PMI will help provide these countries with long-lasting mosquito nets and anti-malarial drugs, and help them conduct mosquito-spraying procedures. The partnership will also include education and evaluation programs, to make sure what we're doing is effective and that it reaches the largest number of people.

Medicines, mosquito-spraying programs, and nets are vital to our campaign against malaria. Yet we're also aware that our aid must help build African anti-malaria efforts that are sustainable. So another important part of our malaria initiative -- and other aid programs, like the President's Emergency Plan for AIDS Relief -- is eliminating the conditions that allow these diseases to flourish.

One is the lack of doctors and nurses to meet these crises. As part of our AIDS effort, PEPFAR resources are being used to train community health workers in African cities and villages. Many more are needed, and I encourage everyone here to contribute to this effort. With every new health care worker, a long-term, sustainable health care infrastructure is being built -- one that can also curb diseases like avian flu, tuberculosis and malaria.

To end malaria, more people must be educated -- because life-saving nets, sprays and medicines work better when people know how to use them. And too few people know how malaria is transmitted. Every country has the obligation to educate its citizens, which is why every country must also improve literacy. This is especially important for women, so that they can make wise choices that will keep them, and their children, healthy and safe.

The campaign against malaria is a broad and challenging undertaking, requiring cooperation among many different countries, agencies and programs. To lead this effort, the President created the position of a Malaria Coordinator. Today, I'm privileged to introduce our first coordinator, Admiral Timothy Ziemer. Admiral Ziemer. (Applause.) With his distinguished 31-year career in the Navy, and his work as Executive Director of World Relief, Admiral Ziemer brings both efficiency and compassion to this position, and I know he'll do a terrific job. Congratulations, Admiral.

And congratulations to all of you. Because of your dedication to defeating malaria, people throughout Africa are being kept in good health. And for the first time, millions of people in malaria-devastated countries have hope -- people like a little Ugandan boy named Komakec.

In March, USAID workers met this boy's mother, a young woman who had already lost two sons to malaria before they reached the age of three. When her third son was born, she named him Komakec -- which in Acholi means "I am unlucky." Little Komakec, too, eventually became infected, but unlike his brothers, he was brought to a health clinic in time to receive life-saving treatment.

When he left the clinic, he and his mother brought home a long-lasting, insecticide-treated net they received through PMI. Thanks to the net, Komakec is healthy, and his mother now knows that children in their village are lucky.

Throughout Africa, millions of mothers can now celebrate healthy children. Thank you for your commitment to them, and to defeating this epidemic. We look forward to working with you, to our future partnerships, and to ending malaria.