For Immediate Release
Office of the First Lady
June 5, 2006

MRS. BUSH: Well, I'm excited to be here today, here in this school, Our Lady of Perpetual Help. We are announcing that 206 schools in 42 states will be receiving Laura Bush Foundation grants for new materials for their libraries. This is the fifth year that we've made grants to U.S. schools, and I'm really excited to get to be at this one. Three Washington, D.C. schools will win the grant, including this one, and then many other schools around the country. 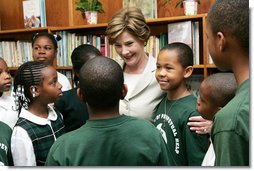 So the Laura Bush Foundation was started in 2001 specifically to help schools, all school libraries buy materials for their students. And we're really excited that now we've given I think over $3 million in the last five years to 600-some odd schools nationwide.

So I'm so excited to be here at this school. I'm glad that they're going to have the benefit of a grant from the Foundation so they'll have a lot of new books in their school library when they come back next year.

So thanks everybody for coming.