For Immediate Release
Office of the First Lady
June 2, 2006

MRS. BUSH: Thank you, President Eliasson and distinguished guests, for the privilege of speaking with you today. This is a hopeful moment in our fight against AIDS, but our meeting is also tinged with sadness. Last month, we lost a dedicated public servant: Dr. J. W. Lee, Director General of the World Health Organization. 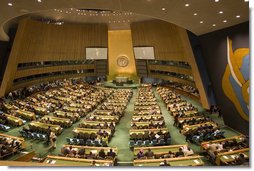 Dr. Lee recognized HIV/AIDS as one of the great humanitarian crises of our time. Around the world, almost 40 million people are infected. AIDS respects no national boundaries; spares no race or religion; devastates men and women, rich and poor.

No country can ignore this crisis. Fighting AIDS is an urgent calling -- because every life, in every land, has value and dignity.

At the Special Session on HIV/AIDS in 2001, U.N. member nations committed themselves to action. In the United States, our commitment took the form of the President's Emergency Plan for AIDS Relief, a five-year, $15 billion initiative to combat AIDS in 120 countries around the world. With increasing contributions each year, the American people are on track to meet or exceed this commitment.

The Emergency Plan works in partnership with the hardest-hit countries, and that partnership is saving lives. When President Bush announced PEPFAR at the beginning of 2003, only 50,000 people in sub-Saharan Africa were thought to be receiving anti-retroviral treatment. Now, in PEPFAR's 15 focus nations, the United States has helped provide treatment for more than 560,000 people. Even more are being reached through America's contributions to the Global Fund.

This direct medical care keeps people in good health. And education is spreading hope. Millions are now learning to live with HIV/AIDS -- instead of waiting to die from it.

In parts of sub-Saharan Africa, new data shows that Africa's ABC model of AIDS prevention has led to dramatic declines in HIV infection rates in young men and women. Pregnant mothers with HIV now know that their unborn children don't have to inherit the disease.

These are important victories. But in order to defeat AIDS, much work remains.

All people need to know how AIDS is transmitted, and every country has an obligation to educate its citizens. This is why every country must also improve literacy, especially for women and girls, so that they can make wise choices that will keep them healthy and safe.

There are too few doctors and nurses to meet the demands of the AIDS crisis, so the United States is dedicating PEPFAR resources to train community health workers in African cities and villages. Many more are needed, and I encourage all member states to contribute to this effort. Every worker trained helps build a sustainable health care infrastructure -- one that can also help curb malaria, tuberculosis, and other diseases. 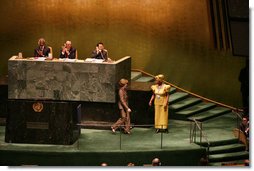 But life-saving treatment never reaches people who do not know they're infected. So we must make sure more people know their HIV status. Here in the United States, June 27th is recognized as National HIV Testing Day. The United States will soon propose the designation of an International HIV Testing Day. I urge all member states to join us in support of this initiative. (Applause.)

I've met people around the world living with HIV/AIDS -- people like Babalwa Mbono. In 2002, Babalwa was pregnant with her second child when she discovered she was HIV-positive. Worried about her unborn baby, Babalwa sought counseling at one of Africa's Mothers-to-Mothers-to-Be Centers, where infected women receive treatment to keep their unborn children from contracting HIV. Babalwa's baby was born HIV-free -- and now Babalwa is a site coordinator for the Mothers Program, sharing her experience with other women.

Millions of people like Babalwa can now have a second chance at life. Their needs are great, but so is the inspiration they provide. And it's a privilege to stand with them.

Thank you for your commitment to defeating this pandemic. The United States looks forward to working with you, and to finally winning the fight against AIDS.