For Immediate Release
Office of the Press Secretary
June 1, 2006

THE PRESIDENT: I want to thank the members of my Cabinet who came today. We had a really good discussion about a variety of important issues. We talked about the war against terror, and I reminded our Cabinet Secretaries that we all have a responsibility to help us win this war, including sending members of our administration to Iraq, to help this new democracy succeed. 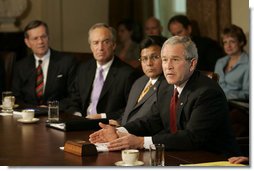 And then we heard from Secretary Snow about the strength of this economy, and what we intend to do to keep it strong. One thing we intend to do is to continue to work with the United States Congress to make sure the tax cuts we passed are permanent. It turns out our pro-growth economic policies have worked, and the best way to make sure that the recovery we have is sustainable is to keep those taxes low. The Secretary briefed us on the fact that revenues coming into our treasury look very robust. The best way to balance the budget is to keep pro-growth economic policies in place, and at the same time, work with our Cabinet Secretaries to keep spending down.

And so I'm very pleased with the progress on our economy, and I want to, again, thank my Cabinet Secretaries for being here. And now I'll answer a couple of questions. Jennifer.

Q Thank you, sir. Do you have either China or Russia on board with Iran?

I spoke to the President of Russia and explained my position clearly to him, and that is, the choice is up to the Iranians whether or not they're going to listen to the world demand, and if they do, we've got something to talk to them about. And if they don't, we expect Russia to participate in the United Nations Security Council. We'll see whether or not they agree to do that. I got a positive response from the President. He said he understands our strategy, and he agrees we want to solve this issue diplomatically.

I also spoke to President Hu Jintao this morning. I laid out to him why I instructed Secretary Rice to do what she did. And now it's going to be up to the Iranians to make their decision, and if they choose not to verifiably suspend, we have laid the groundwork for an effective international response. 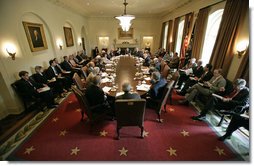 Q Was the response from President Hu positive?

THE PRESIDENT: They understood our strategy, and they understood -- the most positive thing about all the conversations I had is there is uniform agreement that the Iranians should not have a nuclear weapon. And we'll discuss tactics and strategies to make sure that the international community speaks with one, clear voice if the Iranians choose not to verifiably suspend. And so we'll see what their decision is. My decision is to be robust in trying to solve this problem diplomatically.

Matthew. Reuters. Yes, there you are.

Q But the Iranian Foreign Minister, today, has already -- while welcoming the offer of talks, has rejected the idea that they would first suspend uranium enrichment. How do you react to that, and is it now --

THE PRESIDENT: My reaction is, the choice is theirs. And we'll see whether or not that is the firm position of their government. If that's what they decide to do, then the next step, of course, will be to -- for our coalition partners to go to the United Nations Security Council. And the choice is up to the Iranians. And they've already said, by the way, that they're willing to suspend. And this gives them a second chance to make their words mean something.

I want to solve this problem diplomatically, and I want to solve it peacefully. And the best thing for the Iranians to understand is that if they choose not to suspend in a verifiable -- if they continue their obstinance, if they continue to say to the world, we really don't care what your opinion is, then the world is going to act in concert. The next step of acting in concert is to go to the United Nations Security Council.

Q Why do American forces in Iraq need retraining on core values, as the military puts it?

THE PRESIDENT: Our troops have been trained on core values throughout their training, but obviously there was an incident that took place in Iraq. It's now being investigated. And this is just a reminder for troops in Iraq, or throughout our military, that there are high standards expected of them and that there are strong rules of engagement. The Haditha incident is under investigation. Obviously, the allegations are very troubling for me and equally troubling for our military, especially the Marine Corps. I've spoken to General Pace about this issue quite a few times. And he's troubled by the allegations because he understands that the Marine Corps has got a proud tradition of upholding rules of engagement.

Q Have you gotten updates on the situation?

THE PRESIDENT: Well, I'm not involved with the investigation, and you shouldn't expect me to be. I expect this investigation to be conducted independent of the White House, with a full and thorough investigation. And I'm confident. Listen, the Marine Corps wants to get to the bottom of this. If anybody wants to make sure that they know the facts and to correct problems, if they do exist, it's the United States Marine Corps. They are run by -- the Marines are run by an incredibly proud group of men and women who understand the history and tradition of the Marines. And they'll get to the bottom of this.

And if there is wrongdoing, people will be held to account. And at the same time, what you're seeing is the Marine Corps reminding our troops about what it means to be a Marine, what it means to uphold the honor of that Corps, and what it means to adhere to the rules of engagement that we expect our soldiers to adhere to. The United States of America has got a willingness to deal with issues like this in an up-front way, in an open way, and correct problems. And that's what you're going to see unfold.