For Immediate Release
Office of the Press Secretary
May 31, 2006

THE PRESIDENT: Thank you. Thanks for the warm welcome. It's great to be back with the really fine people here at the Central Intelligence Agency.

I'm honored to be here at the swearing-in of Mike Hayden as America's new Director of the CIA. He's such a good man, we're going to swear him in twice -- (laughter) -- yesterday and today. 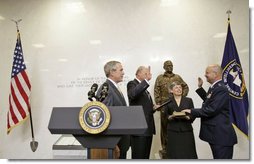 Mike is a patriot, he's a reformer, he's one of our nation's finest intelligence professionals. I know firsthand how good this guy is; I've worked with him on some really important issues related to the security of the United States. He brings more than two decades of experience in the intelligence field. He is going to be a superb leader for the dedicated men and women of the CIA.

I'm proud to serve with you. It is such an honor to serve the United States of America and I appreciate your serving along my side to make America secure. The role of the CIA is critical to the security of the United States. This agency is helping to lead the intelligence war against the terrorists who attacked us on September the 11th, 2001. They continue to plot attacks, and together, we are going to stop them.

The role of the CIA is vital to my doing my job. I cannot do my job without the Central Intelligence Agency. This agency remains the principle provider of intelligence analysis to the President, to the Director of National Intelligence, and to senior national security officials in my administration. As Director of the CIA, Mike will continue the reforms needed. America's leaders are going to have the best possible intelligence, and Mike Hayden is going to work with you to see that that's the case.

I've asked Mike to continue to develop the human intelligence capabilities of the CIA which are essential to understanding the plans and intentions of dangerous regimes and terrorist organizations around the world. I've asked Mike to continue improving the analytical skills of the CIA, which apply the best minds to interpret the intelligence that we gather. I'm confident that under Mike's leadership, the CIA will help us stay ahead of America's enemies and win the war on terror.

The men and women who work here at the CIA have got a tough job and a really important job. You must penetrate closed societies and secretive organizations. You must master foreign languages and deal with unfamiliar cultures. Much of your work is secret, and American lives depend on that work remaining secret. America appreciates the good work you're doing, and so do I.

And in Mike Hayden, you have a leader who recognizes your talents, who understands your challenges, and will ensure that you remain the finest intelligence agency in the world.

In his new position, Mike will build on the good work of Director Porter Goss. Nearly two years ago, I asked Porter to take on a tough assignment, the transformation of the CIA. Porter carried out that assignment with skill and determination. He upheld the high standards and proud tradition of the agency. And he leaves behind a CIA that's stronger than the one he found. And Laura and I wish Porter and his family well as they begin a new chapter in their lives.

Mike Hayden succeeds Porter Goss at a time of great change in the world, and great challenge for our intelligence community. Under the leadership of John Negroponte, our intelligence community is growing more integrated and more effective every day. And under the leadership of Mike Hayden, the Central Intelligence Agency will continue to play a critical role in our nation's intelligence enterprise. Mike understands that the CIA must transform to confront new dangers, and do so without slowing the high tempo at which it already operates to protect this country. I'm confident that with Mike Hayden at the helm, the CIA will succeed, and continue to make important contributions to the security of the American people.

As Mike takes on this important assignment, he has my trust, my full trust, and he has the support of a loving family. I'm glad to see his wife, Jeanine, his children and grandchildren, and his father, Harry, and all the other members of the Hayden family who have joined us, as well, today.

I want to thank Mike for agreeing to serve our nation once again, and I look forward to continuing to work with him to do our duty to protect the American people.

Thank you all for coming today. May God bless Mike Hayden, may God bless you all, and may God continue to bless America. (Applause.)

(The oath of office is administered.) (Applause.)

DIRECTOR HAYDEN: Thank you all very much. I will keep this very short. Mr. President, thank you for the honor of placing your confidence in me, and for all of us here and around the world, thank you for the faith you have placed in this agency.

For my family, thank you once again for your continued support. I could not be more grateful. To my new friends and partners here at the Central Intelligence Agency, thank you for the warmth of your welcome over the last 24 hours. The President has laid out in front of us what we have to do, and as I said yesterday in the bubble when I talked to you for the first time, let's just go to work.