For Immediate Release
Office of the Press Secretary
May 30, 2006

THE PRESIDENT: Good morning. Welcome to the White House. I'm pleased to announce that I will nominate Henry Paulson to be the Secretary of the Treasury.

The past eight years, Hank has served as Chairman and Chief Executive Officer of the Goldman Sachs Group. It's one of the most respected firms on Wall Street. He has a lifetime of business experience; he has an intimate knowledge of financial markets and an ability to explain economic issues in clear terms. He's earned a reputation for candor and integrity. And when he is confirmed by the Senate, he'll be a superb addition to my Cabinet. 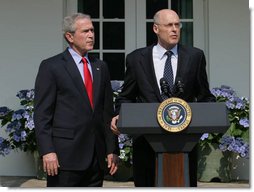 For the past three years, Secretary John Snow has shown strong leadership in carrying out these responsibilities. John answered the call to public service in a time of uncertainty for our economy, and under his leadership, we have seen a broad and vigorous economic resurgence. He's been a steady advocate for small business entrepreneurs and working families, and he's helped deliver jobs and opportunity for the American people. I appreciate his years of service to our country. I wish you, John, and your family, all the very best.

When he's confirmed by the Senate, Hank will build on John's fine work. He takes this new post at a hopeful time for American businesses and workers. In the first quarter of 2006, the U.S. economy grew at an annual rate of 5.3 percent, the fastest growth in two-and-a-half years. We added 5.2 million new jobs since August of 2003. The national unemployment rate is down to 4.7 percent. Productivity is high, and that's leading to higher wages and a higher standard of living for the American people. Hourly compensation grew at an annual rate of 5.7 percent in the first quarter this year.

The American economy is powerful, productive and prosperous, and I look forward to working with Hank Paulison to keep it that way. As Treasury Secretary, Hank will be my principal advisor on the broad range of domestic and international economic issues that affect the well-being of all Americans. Hank shares my philosophy that the economy prospers when we trust the American people to save, spend and invest their money as they see fit. 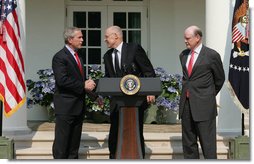 The tax relief we delivered has helped set off the economic expansion that we're seeing today. And one of Hank's most important responsibilities will be to build on this success by working with Congress to maintain a pro-growth, low-tax environment.

Hank also understands that the government should spend the taxpayers' money wisely or not at all. He will work closely with Congress to help restrain the spending appetite of the federal government and keep us on track to meet our goal of cutting the deficit in half by 2009.

Hank will also be an important representative of the United States on the international scene. As an investment banker, he understands the importance of opening new markets for American exports. He will insist on fair treatment for American businesses, workers and farmers. He will help ensure that our trading partners play by the rules, respect intellectual property rights, and maintain flexible, market-based exchange rates for their currencies.

To all these tasks, Hank brings a record of achievement and excellence. He grew up on a farm in Illinois. He went to college at Dartmouth. He starred on the field as an all-Ivy football player and in the classroom as a Phi Beta Kappa student. He earned an MBA from Harvard. He served in the Pentagon and here at the White House. He started at Goldman Sachs in 1974, and rose to its top office after 24 years of distinguished work at the firm. He has a lifelong passion for nature, and he's served as chairman of the Nature Conservancy, where he has promoted conservation both at home and abroad.

As one of America's most prominent business executives, Hank has been a strong and consistent voice for corporate accountability. When the corporate scandals broke, Hank showed his leadership and character by calling for reforms that would strengthen the way America's public companies are governed and improve their accounting practices. And as Treasury Secretary, Hank will bring those high standards to one of the most important posts in Washington.

I want to thank Hank for his willingness to leave one of the most rewarding jobs on Wall Street to serve the American people. Hank will follow in the footsteps of Alexander Hamilton and other distinguished Treasury Secretaries who used their talents and wisdom to strengthen our financial markets and expand the reach of the American Dream.

Hank is going to make an outstanding Secretary of the Treasury. And I call on the United States Senate to promptly confirm him. 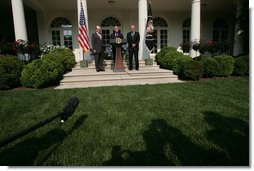 SECRETARY SNOW: Thank you, Mr. President. And thank you very much for those gracious words. I appreciate that. That means a lot.

Let me say first, it's been a great honor, a terrific honor to serve as the 73rd Secretary of the Treasury, and I will always be grateful to you for the opportunity you gave me. But as you know, I've looked forward for some time to returning to private life, and I do so with a great sense of satisfaction in what has been accomplished over the last three-and-a-half years. The facts are in: Your economic policies have put the American economy on a strong, upward path. And I've been pleased to have had a part in working with you to advance those policies.

The American economy today is growing and expanding at a rate well above the rest of the industrialized world. Businesses are investing, productivity growth is strong, and millions of new jobs have been created with rising wages. The foundation for continued prosperity is well in place.

Mr. President, at a critical time in our country's economic history -- and you alluded to it -- you recognized the need for tax relief to lower the marginal rates on work, risk-taking, savings, and investment. Those policies lie at the heart of the recovery we're now enjoying, a recovery which has also seen a dramatic increase in federal revenues. That surge in government receipts, along with the strict control on spending that you've advocated, are putting us on a path to not only meet your deficit reduction target, but to do so ahead of schedule.

The real deficit, as you have said often, is the unfunded obligations that loom ahead. Because of your leadership we're on a much stronger footing today to address those challenges.

Thanks also to your leadership, the Treasury Department today is in the forefront of the war on terror, using the authorities at our disposal to identify and disrupt terrorists and their funding activities and following the financial trail they leave. Terrorists are motivated by hatred, but they carry on their evil activities with money. By going after the money, and using the authorities that you have made possible at Treasury, we're playing a key role in the war on terror.

Let me say it's been a great honor, indeed, to work with the extraordinary and able, dedicated people of the U.S. Department of the Treasury. They reflect the very best traditions of public service, and I will forever be grateful to them for their support.

Mr. President, in Hank Paulson, you've made a superb choice to lead the Treasury Department. He's an old friend, somebody I've admired and respected and worked with over the years. He's a proven executive with wide-ranging business and financial experience, combined with a keen sense of public service. Hank will be a great addition to your administration.

In closing, thank you again, Mr. President, for your support. As I prepare to take my leave, I wish you all the best in the years to come as you lead this great country. As always, you will have my full support.

THE PRESIDENT: Thank you, Mr. Secretary. Thank you very much.

MR. PAULSON: Mr. President, thank you for the honor to serve you and our country. During my 32-year career in finance, I have developed a keen appreciation for the role that capital markets play in driving economic growth and efficiency, putting capital behind people and ideas. I have witnessed and participated in the globalization of finance as major economies around the world have become increasingly interdependent. Of course, the whole world is dependent upon the U.S. economy as a major engine of its growth. And our economy's strength is rooted in the entrepreneurial spirit and the competitive zeal of the American people, and in our free and open market. It is truly a marvel, but we cannot take it for granted. We must take steps to maintain our competitive edge in the world.

Mr. President, if confirmed, I look forward to working with you, your administration, and the Congress to help keep the American economy strong and competitive.

Let me also say, I'm also very, very grateful to my family for their understanding and for their support. Thank you.