For Immediate Release
Office of the Press Secretary
May 29, 2006

THE PRESIDENT: Thank you all. Laura and I are honored to join you today. Thank you for coming. Mr. Secretary, thank you for your kind words. Members of my Cabinet, General Pace, Members of Congress, members of the United States military, veterans, honored guests and the loved ones of the fallen: A few moments ago, I placed a wreath at the Tomb of the Unknowns. I was honored to do so on behalf of the American people, as a sign of our solemn gratitude and our deep respect. The names of those buried there are known only to God, yet their souls have entered into the spirit of America, and they will never be forgotten by our nation. (Applause.) 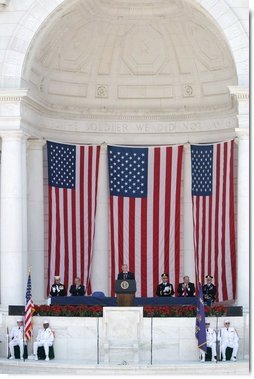 In this place where valor sleeps, we acknowledge our responsibility as Americans to preserve the memory of the fallen. On this Memorial Day, we look out on quiet hills, and rows of white headstones -- and we know that we are in the presence of greatness. (Applause.) The markers here record the names of more than 296,000 men and women. Each of the soldiers, sailors, airmen and Marines buried here answered the call to serve, and stepped forward to protect the nation they loved.

All who are buried here understood their duty. They saw a dark shadow on the horizon, and went to meet it. They understood that tyranny must be met with resolve, and that liberty is always the achievement of courage. (Applause.) Here, in the presence of veterans they fought with and loved ones whose pictures they carried, the fallen give silent witness to the price of our liberty -- and our nation honors them, this day and every day. (Applause.)

In this place where valor sleeps, we are reminded why America has always gone to war reluctantly, because we know the costs of war. We have seen those costs in the war on terror we fight today. These grounds are the final resting place for more than 270 men and women who have given their lives in freedom's cause since the attacks of September the 11th, 2001. With us here are veterans who fought alongside them -- and who have come today to pay their respects. They are joined by veterans of World War II, Korea, Vietnam, and other conflicts across the globe, whose friends and comrades also lie in this sacred ground. As we pray for their fallen friends, we also remember those who went to war and are still missing, and we are determined to account for them all. (Applause.)

In this place where valor sleeps, we find strength in knowing that those serving freedom's cause have acted with principle and steadfast faith. Second Lieutenant Jack Lundberg was killed two weeks after D-Day, at the end of World War II. He wrote his Mom and Dad a letter to be opened in the event he did not come home. He wrote, "I am sorry to add to your grief ... but we of the United States have something to fight for -- never more fully have I realized that. The United States of America is worth the sacrifice." 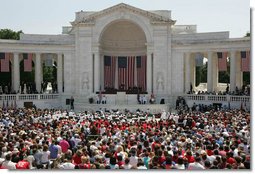 That same feeling moves those who are now fighting the war on terror. First Lieutenant Mark Dooley was killed by a terrorist bomb last September in the Iraqi city of Ramadi. Before he left for his tour, he gave his parents a last letter, just in case. He wrote: "Remember that my leaving was in the service of something that we loved, and be proud. The best way to pay respect is to value why a sacrifice was made." (Applause.)

Last week, the family of Lieutenant Colonel Joseph Fenty, Junior, gathered here at Arlington to pay their last respects to the husband, son, and father they loved. Colonel Fenty was killed with nine of his fellow soldiers in a helicopter crash in Afghanistan earlier this month. Hours before that crash, he had spoken to his wife Kristen about their newborn daughter he was waiting to meet. Some day she will learn about her dad from the men with whom she served -- he served. And one of them said this about her father: "We all wanted to be more like Joe Fenty. We were all in awe of him." I am in awe of the men and women who sacrifice for the freedom of the United States of America. (Applause.)

Our nation is free because of brave Americans like these, who volunteer to confront our adversaries abroad so we do not have to face them here at home. Our nation mourns the loss of our men and women in uniform; we will honor them by completing the mission for which they gave their lives -- by defeating the terrorists, by advancing the cause of liberty, and by laying the foundation of peace for a generation of young Americans. (Applause.) Today we pray that those who lie here have found peace with their Creator, and we resolve that their sacrifice will always be remembered by a grateful nation.

May God Bless the Untied States of America. (Applause.) 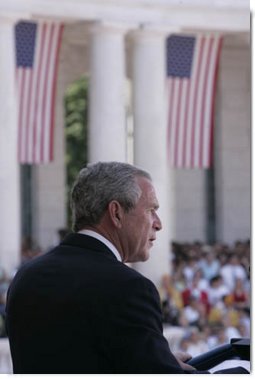