For Immediate Release
Office of the Press Secretary
May 26, 2006


The United States has no closer ally than the United Kingdom. U.S. and U.K. forces are fighting terror in Afghanistan, Iraq, and around the globe. The Prime Minister and the President discussed ways to strengthen defense cooperation. 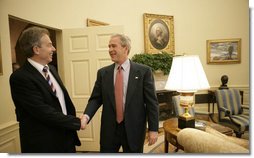 The two leaders are pleased to announce that the United States and United Kingdom recently signed an agreement that allows appropriately cleared British and U.S. personnel to use the same computer network to access military and intelligence information and other planning tools to support joint military operations in the defense of freedom.

Additionally, the leaders recognize that as American and British soldiers, sailors, airmen, and marines are right now standing together in harm's way, we must plan for the future capabilities that will enhance our ability to cooperate. Both governments agree that the UK will have the ability to successfully operate, upgrade, employ, and maintain the Joint Strike Fighter such that the UK retains operational sovereignty over the aircraft. Further, both governments agree to protect sensitive technologies found within the Joint Strike Fighter program. Together, we are working out the details, while remaining committed to these principles.

Finally, the President and Prime Minister have a shared view that we need to continue to strengthen and deepen the relationship between our defense establishments to achieve fully interoperable forces and to leverage the respective strengths of U.S. and U.K. industries. The Prime Minister and President look forward to new ways we can achieve that goal.