For Immediate Release
Office of the First Lady
May 23, 2006

MRS. BUSH: Thank you, Lynn. Thanks, everyone. I'm so happy to be here today at Mesa Verde. I look forward to these opportunities that I have to visit our national parks, and then to actually get to hang around a little bit and hike. And so I'm really looking forward to a couple of days here.

I want to recognize Fran Mainella, the Director of the National Park Service. Fran, thank you for your good work. And Larry Weise, the Superintendent, Betty Janes, the Assistant Superintendent of Mesa Verde. Peter Pino, thank you for the blessing that you gave earlier. Peter, as you know, is the former Governor of the Pueblo of Zia.

I'm delighted to be here on this very, very special celebration for Mesa Verde, the 100th Anniversary of Mesa Verde as a national park. Amid these centuries-old dwellings, we're reminded of Mesa Verde's special place in our national park system. Many of our parks offer awe-inspiring landscapes or iconic structures, but visitors to Mesa Verde have a unique opportunity to enjoy both. Mesa Verde is actually the first national park that was established to protect America's man-made treasures, and thanks to a century of custodianship by Mesa Verde rangers, God's creation and man's will be enjoyed here for centuries to come. Congratulations to all of you.

I'm happy today to have the opportunity to explore a few of Mesa Verde's more than 4,000 archeological sites, including some of the famous cliff dwellings. These sites reflect the culture of this region's ancient inhabitants, tracing their progression from basket weavers, to pottery makers, to farmers, to urban planners, who developed some of America's earliest communities.

These dwellings also show us the connection between the ancestral pueblo people and their descendents who live in the Southwest today. In fact, 24 Native American tribes in this region have an ancestral affiliation with Mesa Verde.

So thanks to generations of rangers and volunteers, their history is preserved, along with the history of human civilization in the Americas.

Today, as we celebrate the 100th birthday of Mesa Verde, we also celebrate a century of our national park system. As Teddy just told us, in 1906, President Theodore Roosevelt signed the Antiquities Act, legislation that established federal protection of our country's historic sites, and began the national park network that culminates today in 390 national parks nationwide. 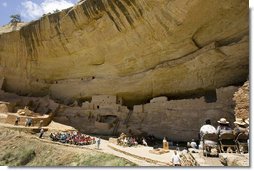 Our national parks are a fantastic resource, and I encourage all Americans to learn more about how you can enjoy them. I've enjoyed our parks for a long time, and I hike in one every year with my friend Regan, who is with us here today, and other friends of ours that grew up with me in Midland, Texas. We began this tradition on our 40th birthday by floating down the Colorado River in the Grand Canyon, and then hiking the 10 miles up the south rim. Since then, we've visited some of our country's most magnificent parks -- Yosemite, Glacier, Yellowstone, Olympic National Park. And then last year, we did that Colorado River trip again with our daughters. And a few years after that first time, when we were 40, it was a lot harder to walk out those 10 miles. (Laughter.)

These hikes reminded me that our parks reflect not only Theodore Roosevelt's commitment to conservation, but also his reputation as a very intense fitness buff.

Visiting our parks can be a life-changing experience, and we need to make sure our landscapes are preserved and kept accessible to all Americans. We especially want to make sure that our parks are enjoyed by our young people, so that they can develop a lifelong appreciation of America's resources and the desire to protect them for their own children.

Here at Mesa Verde, children are introduced to our parks through the International Junior Rangers program. Like our national Junior Rangers, children who participate in the international program -- including the students who are here with us today from Manaugh Elementary School -- are encouraged to learn about American history, about the diverse features of our landscape, and about the abundance of wildlife in America.

In partnership with Mesa Verde's sister parks -- Monte Alb n and Paquime in Mexico, and Caracol in Belize -- park rangers are teaching children in all three countries about their connection with each other, their historical and cultural ties that they share.

A hundred years ago, President Roosevelt believed, as we believe now, that America's treasures are, and I quote President Roosevelt, "not for ourselves alone." All of you in the Mesa Verde community uphold this principle, and your efforts have been widely recognized. In 1978, Mesa Verde was the first location in the United States honored as a UNESCO World Heritage site. Mesa Verde has also received almost $1.8 million in grants from Save America's Treasures, part of our federal preservation effort. 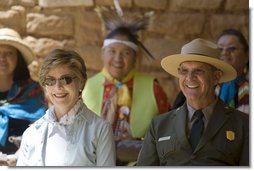 Preservation is an issue President Bush and I care about very deeply. In 2003, he announced the Preserve America Initiative to encourage communities to safeguard our cultural and natural heritage. Preserve America can also help boost local economies, because recognized historical landmarks attract visitors and businesses to communities. In this way, Save America's Treasures and Preserve America complement each other. One program provides grants to help rescue individual landmarks; the other encourages Americans to improve access and protection of their historical and natural treasures for the benefit of their communities and for the benefit of our whole country.

In the three years since President Bush announced the initiative, we've honored historical organizations, history teachers, and entire communities -- 372 of them, in fact -- for their preservation work. Eleven of those Preserve America Communities are here in Colorado.

Mesa Verde is a shining example of historic preservation in this state and throughout the country. Even though Mesa Verde spans more than 52,000 acres, the park's archeological sites are some of the best cared for in the United States. At the same time, all of you in the Mesa Verde community have protected these resources in a way that keeps them open for Americans to be able to visit them. In fact, you've chosen to mark your 100th birthday by expanding access to Mesa Verde this year, opening the park to lecture series, photography workshops, horseback rides and ranger walks.

The Mesa Verde community's ability to protect these centuries-old treasures, while eagerly sharing them with the world, represents the very best of our national parks, and the generous spirit of Americans. Congratulations on your first century of terrific accomplishment, and I wish you many, many more. Thank you all very, very much. (Applause.)