For Immediate Release
Office of the Press Secretary
May 17, 2006

THE PRESIDENT: Thank you all. Please be seated. Good afternoon, and welcome to the White House. It's nice to see so many members of Congress at this end of Pennsylvania Avenue. (Laughter.) And you've come for a really good reason. This is a good day for American workers and families and businesses. You have passed a bill that will keep our taxes low and keep our economy growing. And I'm really pleased to be able to sign this vital piece of legislation. Thank you for your leadership. (Applause.) 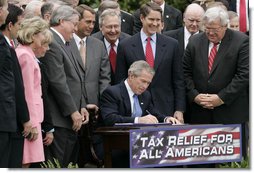 I want to thank the Speaker of the House, Denny Hastert. Mr. Speaker, welcome back to the White House. Thank you for your leadership. And I want to thank Senator Bill Frist, the Senate Majority Leader. Both these men have shown fine leadership capabilities on an important issue for the American people.

I want to thank Mitch McConnell, John Kyl, Kay Bailey Hutchison from the United States Senate. I want to thank John Boehner, Deborah Pryce, Eric Cantor. I particularly want to pay my respects to the Chairman of the Senate Finance Committee and the Chairman of the House Ways and Means Committee. Chuck Grassley and Bill Thomas are incredibly able legislators. They've done a fantastic job on behalf of the American people, and our nation owes them a debt of gratitude. (Applause.) I appreciate all the members being here today.

Economic growth begins with the hard work of the American people and good policies in Washington, D.C. Over the past few years our economy has faced a lot of challenges. We've been through a recession, a stock market decline, corporate scandals, an attack on our country, high energy prices and major natural disasters. But we acted. We believe that our economy prospers when the American people make their own decisions about how to save and spend and invest their own money. And starting in 2001 we delivered the largest tax relief since Ronald Reagan was in the White House. (Applause.) 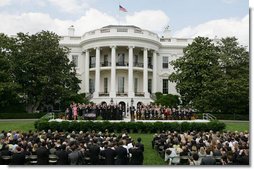 We reduced taxes for every American who pays income taxes. We doubled the child tax credit, reduced the marriage penalty, created new incentives for small businesses to invest. We put the death tax on the road to extinction. The American people have used their money better than the government ever could have. They've used the tax relief to provide for their families and create jobs and help the American economy become the envy of the industrialized world.

Our pro-growth policies stand in stark contrast to those in Washington who believe you grow your economy by raising taxes and centralizing power. They are wrong. Our pro-growth economic policies are working for all Americans. (Applause.)

One of the most important decisions we made was to cut the taxes on dividends and capital gains. (Applause.) These cuts were designed to lower the cost of capital and to encourage businesses to expand and hire new workers. And these tax cuts are doing exactly what we expected.

The cuts on dividends and capital gains are reaching families and businesses alike. About half the households in America, 57 million in all, have some investment in the stock market. And they either own shares in individual companies or through mutual funds. Sometimes, they own these shares through their retirement plans. By cutting the taxes on dividends and capital gains, we helped add about $4 trillion in new wealth to the stock market.

The danger was that the tax cuts on the dividends and capital gains were set to expire in 2008. That's created great uncertainty because businesses and investors couldn't plan for the future without worrying about a big tax increase around the corner.

That uncertainty discourages investment and expansion. It reduces opportunities for workers and families. The bill you passed helps to address this problem by extending the tax cuts on dividends and capital gains. By reassuring businesses that their taxes will not be going up any time soon, the bill increases confidence for our job creators. It will help millions of American families who are saving for the future.

Part of our strategy to cut our deficit in half is to continue to grow this economy. Tax relief has helped a growing economy, which means more tax revenue for the federal treasury. 2005 tax revenues grew by $274 billion, an increase of nearly 15 percent over the previous year. This year the economy is still growing, and tax revenues are growing with it. So far, tax revenues are 11 percent higher than they were at the same point last year, which is better than projected. More than a quarter of these tax revenues come from corporations who pay more because they're growing with the economy.

By growing this economy, we're staying on track to meet our goal of cutting the deficit in half by 2009. But to meet that goal, we must be strong on controlling the federal appetite for spending. Every year since I took office, we've slowed the growth of discretionary spending that's not related to the military or homeland security. My last two budgets have actually cut this kind of spending.

Congress is now considering an emergency supplemental bill that can show the American people we're determined to be fiscally sound with their money. I've set a clear limit on spending that I'll accept for this legislation, and if this bill goes over the limit, or includes non-emergency or wasteful spending, I'll veto it. (Applause.)

For the past 50 years Republicans and Democrats have had many differences, but they've often been able to agree that the American people should keep more of their own money. Presidents like John F. Kennedy and Ronald Reagan proposed and cut taxes with strong bipartisan support, and in each case, the economy prospered and grew.

The tax cuts we passed in 2001 and 2003 have also helped the economy grow and prosper. Opponents of these tax cuts were wrong when they voted against them the first time. They've been wrong to oppose the extension of tax relief in the face of overwhelming evidence that the tax cuts have helped grow the economy and create millions of new jobs.

It's now my honor to sign the Tax Increase Prevention and Reconciliation Act of 2005.