For Immediate Release
Office of the Press Secretary
May 16, 2006

THE PRESIDENT: Thank you. Please be seated. It is a beautiful day to welcome the Monarchs to the White House. I want to first congratulate the 2005 WNBA Champs, the Sacramento Monarchs. We're glad you're here. Thanks for coming and congratulations to you. (Applause.)

I was thinking about a little one-on-one here on the South Lawn. (Laughter.) Then I reconsidered. Laura said, you might as well stick to your mountain bike, don't try to take on these athletes. We're really glad you're here. 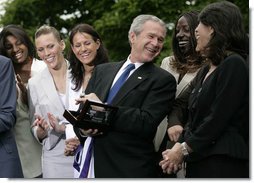 I want to congratulate Coach John Whisenant on being such a fine coach. Congratulations, sir. Glad you're here. Thanks for coming. (Applause.) Glad you brought Joyce. Welcome. I want to thank my Cabinet Secretary, Alphonso Jackson. Welcome, A.J., thanks for coming. I knew you were a sports fan, and I knew you appreciated excellence on the court, so I'm not surprised you're here.

I want to thank Doris Matsui, Congresswoman Matsui, thanks for coming, from the Sacramento area, as well as John Doolittle. I really appreciate you all being here. Thanks for taking time to honor these champs.

I appreciate Donna Orender, the President of the WNBA. Thanks for coming. Proud you're here. I want to thank John Thomas of Maloof Sports & Entertainment for coming. John, congratulations for putting together a good franchise. Good job. It's not easy to field a championship team, but you've done so.

I'm also proud to be up here with Yolanda Griffith, the WNBA Finals MVP. Congratulations, Yolanda. (Applause.) Popular member of the team, as you can tell. I want to welcome all the other Monarch players who are here. I'm honored to be up here with you. I can't thank you enough for coming by to give us a chance to pay a proper tribute to your championship run.

I also want to welcome members of the local Junior WNBA program, glad you all are here. (Applause.) Welcome to the White House. This is the -- interestingly enough, the 10th year of the WNBA, and I don't know if you can remember, but I certainly do, when a lot of people were speculating that the WNBA wouldn't last. They couldn't possibly make it, they were saying. Well the truth of the matter is, the WNBA has not only lasted, it's thrived, and American sports are better for it. (Applause.)

A lot of fans are coming to see the games, which is a good indication. The WNBA broadcasts are seen now in 193 countries in 31 different languages. That means a lot of people are paying attention to what you're doing on the courts. And we appreciate it.

And I appreciate the team. I appreciate a team that's figured out how to, kind of, meld stars together for the common good. You know, there are a lot of teams with stars on them. I'm sure you've run into a few of them with some pretty good stars. But a lot of times, teams aren't able to work together, and this team was able to do so. They were tough on defense. They had an attitude -- a positive attitude all the way throughout the season. In other words, they didn't think they could get beat. As a matter of fact, they only lost two games on their home court. It's a pretty good -- it's called the "home court advantage." (Laughter.) Fifteen and two in Arco Arena. 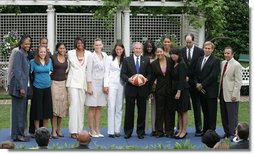 I know the city of Sacramento is really proud of you, and I know that if the Mayor were here and the citizens that are kind of serving the folks of Sacramento were here, they'd be saying, we really like the Monarchs; we're really proud that you brought a championship team to our city.

So one of the things I'd like to say to you is, thanks for being team players, thanks for setting high goals, and thanks for working together to achieve those goals.

I also appreciate the fact that you've got players from China and Portugal and Mali, as well as a lot of different states here in the United States. I think it's pretty neat, isn't it, for people who -- from different backgrounds, different cultures are able to figure out a way to win. I think it's a great example for the world, I really do. I think it's important for people to come together for a common cause. I know you view yourself only as athletes -- but I view you as diplomats, as well.

I also want to thank you for the example you've set. It's one thing to be called "champs" on the court -- it's another thing to be called "champs" in life. One of the things you've done is you've set a great example for young women athletes. As the father of twin daughters -- who had trouble finding a backboard, I might add -- (laughter) -- sorry, girls -- I love the fact that there are role models, though, for young women, that somebody can look up to and say, gosh, I want to be like her; I want to realize my dreams by being like Yolanda.

So it's great to be able to play basketball as well as you play, but it's also really important to know that you're setting a good example for people -- people watching your every move.

I was impressed by the fact that you're working on Read to Achieve. You know, I oftentimes call on fellow citizens to serve our country by helping somebody else. One way you can really help somebody is to teach somebody to read. What a wonderful gift. And the fact that pro athletes were willing to take time out of your busy schedule to help inspire a young reader means a lot to the country.

I appreciate very much your honoring breast cancer survivors, helping to lift somebody's spirits. Thanks for entering the annual Race for the Cure. I used be able to run. (Laughter.) But thanks for running while you're young. I know you didn't have to do it, but you set a good sign for people. All in all, I'm honored to be up here with some champs. It's a delight to welcome you here to the White House. May God bless you and your families, and may God continue to bless our country. Welcome. (Applause.)