For Immediate Release
Office of the Press Secretary
May 16, 2006

Official Visit of the Prime Minister of Australia

PRESIDENT BUSH: Mr. Prime Minister, Mrs. Howard, distinguished guests: Welcome to the White House. This is going to be a joyous occasion because we're honoring two really good friends. We wish you a warm welcome. We thank the Howards for making a long journey. And thanks for spending so much time with us here in the states. 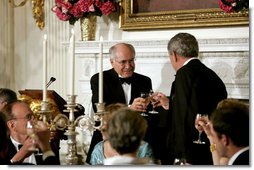 Mr. Prime Minister, we value your courage and your faithfulness and your strength, and I value your friendship. Laura and I have cherished every visit with you and Janette. We really appreciated the chance to plant those trees yesterday at the Australian Embassy. (Laughter.) We wanted to bring a Texas tree up, but they don't grow too well here in Washington. (Laughter.) But I know those trees are going to grow strong and sturdy, just like our friendship has grown strong and sturdy.

I was thinking about how to really describe John Howard and his leadership in Australia, and I thought I would remind everybody what Ronald Reagan used to say, it was "morning in America." And Mr. Prime Minister, that's still true for our country. We're really an optimistic people and we firmly believe the best days are ahead for our country. I know you feel the same way about Australia. It's also comforting to know that on the other side of the world it's already morning in Australia. (Laughter.)

Mr. Prime Minister, Laura and I offer a toast to you and Janette, to our allies and to the great people of Australia.

PRIME MINISTER HOWARD: Mr. President and Mrs. Bush, ladies and gentlemen: For the Australians present, can I say to you and your charming wife, we are greatly honored by the wonderful courtesy and hospitality that you've extended to us, not only tonight, but in the days before on this visit of ours to Washington. You've spoken of the friendship between our two countries. It is a friendship rooted not only in history, but it's a friendship and partnership rooted very firmly in common values.

I share your sense of optimism, Mr. President, about the future. The world will need America just as much in the future as the world has needed America in the past, and as the world needs America at the present. Those foolish enough to suggest that America should have a lesser role in the affairs of the world should pause and think whether they really mean what they say, because a world without a dedicated, involved America will be a lesser world, a less safe world, a more precarious world.

And if I have a single message for the people of your great country, and that is: The world continues to need America, and the world will be a better place for the involvement and the commitment of the people of the United States of America in the years that lie ahead.

I value very much the friendship between our two countries. I value very much the personal friendship I have with you, Mr. President. You're a staunch friend, you're a faithful ally, you're a strong leader; you have articulated the interests of your country and of the free world at a time of unique and different challenge. And for that I thank you and pay tribute to you.

Janette and I warmly reciprocate the kind things that you've said about us. We greatly value those things and we thank you most warmly for your very gracious hospitality.