For Immediate Release
Office of the Press Secretary
May 15, 2006

Every year on this day our nation flies flags at half staff in grateful memory of the officers who have lost their lives in the line of duty. I emphasize the word "grateful," because we're a grateful nation for those who are willing to serve and to protect us all. 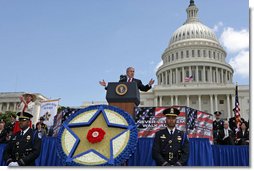 Once again, we added names to the National Law Enforcement Officers' Memorial. And once again, we are here to pay our most sincere respects to those whose names have been added.

The really interesting thing about the law enforcement community is there's such a strong bond between those who serve on the front lines of fighting crime. They sit by your side here in this important event -- they hold your hand, they put their arm around you, they're the brothers and sisters who are trying to help you overcome the pain you're going through.

I know full well, as do all Americans, that in every community, whether it be a big community or a small community, there's a law enforcement officer on the job watching over the neighborhoods, ready for the next call. Each day in our country, more than 850,000 men and women go to work not knowing what the challenges might bring. Yet each day, they're committed to answering those challenges with courage and decisiveness.

One of those who answered the call was Harvey County, Kansas, Deputy Sheriff Kurt Ford. Though Kurt Ford had left the law enforcement in 2001, his heart really never left it. There's something about the law enforcement officer who is so committed to the job that his or her heart never leaves the job. He returned to service after the terrorist attacks on September the 11th. 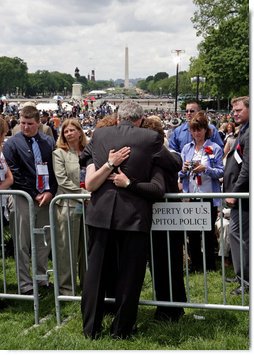 In April, he and a team responded to a domestic violence call early on a Saturday morning. When they arrived at the scene, Officer Ford was shot. It turns out Officer Ford had run toward danger to protect the vulnerable. And today we honor courage of people like Officer Ford.

The call came during the routine parts of the day, as it did for the Columbia, Missouri, Officer Molly Thomas-Bowden. When she was at a traffic stop, Officer Bowden was shot several times. Molly was married to a fellow police officer. She was known to all for her love of horses and her faithful and gentle spirit. Our nation honors the service of people like Molly for her willingness to serve in making America a better place.

You know, the call can come when it's least expected, as it did for Officer Larry Cox of Chillocothe, Ohio. A 19-year-old [sic] veteran of the police force, Officer Cox was off-duty when he stepped up to help fellow officers in pursuit of a suspect. He wasn't even on duty, and yet he knew deep in his soul he needed to help fellow officers in need. And he was shot and killed.

Like many here who wear the uniform, Officer Cox worked with youngsters in the community in which they live. He was a DARE officer. One of the 5th graders he worked with said, "We feel like you're our best friend ... we'll always remember you ... you're with God right now," is what the guy went on to say.

These officers are among the names of those we added. Every one represents an extraordinary person. Every one took an oath and carried a badge and committed his or her life to keeping the peace and protecting others. Every one has brought honor to our nation. And together they live in our national memory as Americans whose courage and commitment has shown the true meaning of heroism.

And so this afternoon, on behalf of all Americans, I offer the respect of a grateful nation, and pledge that their courage and sacrifice will never be forgotten.