For Immediate Release
Office of the Press Secretary
May 14, 2006

Official Visit of the Prime Minister of Australia

PRESIDENT BUSH: Well, first of all, Ambassador, thanks for having us, and happy birthday.

AMBASSADOR RICHARDSON: Thank you very much.

PRESIDENT BUSH: How old are you?

PRESIDENT BUSH: Don't say, then. (Laughter.) It's wonderful to be here with our dear friends, the Howards. I think it is interesting that we're planting two trees, and this is a symbol of our enduring friendship. I can't thank you enough, John, for your strong support of the liberty agenda, deep desire for the world to be a peaceful place. I really enjoy working with you for the common good. Thanks for having us. (Applause.) 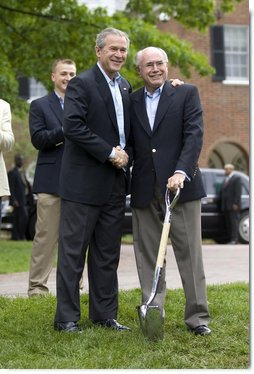 PRIME MINISTER HOWARD: Thank you. Well, George, you and Laura, not only for the offices that you hold, but also for the people you are, are very welcome on this piece of Australian soil in Washington. I indicated to the President a moment ago that it was here on this lawn that I addressed a news conference on the 12th of September, 2001, when I said that Australia would stand side-by-side with the United States in responding to the new threat of terrorism. And that resolve is as strong now as it was on the 12th of September, 2001.

These trees are a wonderful symbol of that friendship. This residence has a lot of history. It was, of course, the very first residence occupied by an Australian envoy to other than a then dominion or Commonwealth country. And when the then Prime Minister RG Menzies announced it, he said that having an ambassador -- a representative or envoy to America represented the first time we were sending one to what he called a foreign country.

There has certainly been nothing foreign in the relationship between our two countries since then, and it's great to have you and Laura with us, and it's a wonderful symbol. The Ambassador has got to look after the trees -- (laughter) -- and to keep his two Rottweilers away from them. (Laughter and applause.) 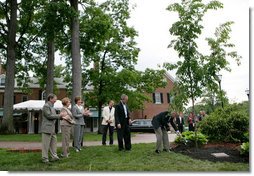