For Immediate Release
Office of the Press Secretary
May 12, 2006 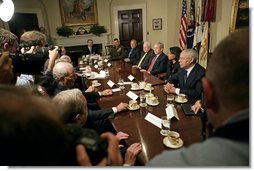 I want to thank you all very much for sharing your thoughts not only with me, but with the Vice President and Secretary Rice and Secretary Rumsfeld. It really means a lot to hear your thoughts and your concerns and your suggestions about the way forward in Iraq. We've had our disagreements in this country about whether or not we should be there in the first place. Now the fundamental question is, how do we achieve our objectives, which is a democracy which can defend itself, sustain itself, a country which is an ally in the war on terror, and a country which serves as a powerful example for others who desire to be free.

Since we last met, a unity government is now in the process of becoming formed. I've got great hopes about this unity government. We've got a Shia as the Prime Minister-designee, a Sunni as the Speaker, a Kurd as the President, all of whom have dedicated themselves to a country moving forward that meets the hopes and aspirations of the Iraqi people.

There are certainly challenges and the Secretaries here discussed those challenges with us. Perhaps the main challenge is the militia that tend to take the law into their own hands. And it's going to be up to the government to step up and take care of that militia so that the Iraqi people are confident in the security of their country. It's important to have a secure Iraq in order for people to go about their daily lives. And we understand that.

I also assured the Secretaries here that this government is committed to success. They've got good people on the ground, we've got brave troops that are working every day to help this country succeed, and at the same time, deny safe haven to al Qaeda.

And again, I want to thank the members for coming -- the former Secretaries for coming. I think it's very useful for those of us who are helping to plot the strategies and the tactics to help secure this country to hear from you. I'm optimistic about our successes. I know this: The only way we will not succeed is if we lose our nerve, we don't have faith in our values, and that we're constantly changing tactics on the ground to achieve our objectives.

So, thank you for coming.