For Immediate Release
Office of the First Lady
May 12, 2006

MRS. BUSH: Thanks so much. I'm the one that should be applauding you. Thank you all very, very much. Thanks, Bonnie, for that very generous introduction. I wish my husband were in the audience to hear it. (Laughter.) 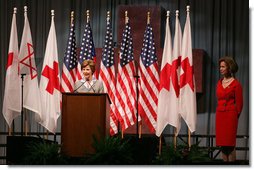 I'm very pleased to be here. It's great to have this opportunity to come here to thank you for what you do. I've seen you all over our country. I saw you in the hurricanes in Florida, year before last; and of course, on the Gulf Coast over and over, from my very first stop there in Baton Rouge on the Friday after the hurricane. And so I really am thrilled and honored to have this chance to thank you all here during your convention.

It's amazing that the American Cross is observing its 125th anniversary of compassion and healing and service. Few organizations have earned such a distinction or established such a legacy for humanity. In terms of the human condition, scientists have learned a great deal about our capacity to function as adults by studying how we develop as infants. Babies show complex emotions, like empathy, within the first few months of life. For example, a baby who senses distress in another will himself become distressed.

What that tells me is we are hard-wired to care for each other, and that volunteers are at their best when they are exercising the innate ability to lend comfort and support in the hour of need. That would also explain why people like you -- the 3,000 agents of mercy in this room -- volunteer almost instinctively. If you're not sure why you volunteer, you are sure that life would be less meaningful if you didn't volunteer.

Each one of you has a story -- like Doug Reese, who, with his wife Mary, has been volunteering for 49 years. These two are fixtures at Red Cross blood drives. Mary started as a Gray Lady in England in 1957. Doug got involved later, when a flood swept through their hometown in North Dakota.

Doug said there's no telling how many times he's threatened to quit volunteering. But, he said, "It just kills you to miss one day, so you always go back. If more people would try volunteering, they'd realize what they're missing out on." Doug and Mary's children inherited their parents' gift for service. Both are certified emergency medical technicians, and volunteers. Doug said, "We're just one of those families that like to see people enjoy life."

And when life takes a turn for the worst, the Red Cross is there to help pick up the pieces -- sometimes millions of pieces. I've seen the Red Cross at work along the Gulf Coast over the past nine months, and I am inspired. I've seen you at your best, well-trained and working in the field, coping with one of the most challenging disasters of the century, and one of the worst hurricane seasons we've ever seen. The 2005 hurricane season reduced portions of the United States to a third-world country. But not for long.

Gulf Coast residents have shown true grit. Brick by brick, house by house, entire communities are coming back to life. And thanks to you, hope is growing, and spreading, and restoring lives. Businesses are returning. So are families. And schools and libraries are opening.

It would have been easy for people to be overwhelmed by the daunting challenge of rebuilding entire communities. It would en easy to give up and start over somewhere else. But you gave them the way to begin at home, and the courage to continue, and the resources to finish the job properly. Most of all, you gave them a future in places that hold so many happy memories from the past. You're a part of their triumph. And I salute you.

Picking up the pieces may seem like business as usual for you, but for the rest of us, it's astonishing: During last year's hurricane season alone, a quarter of a million Red Cross workers served 34 million meals to storm victims and rescue workers. You provided shelter, counseling, compassion, emergency aid and financial assistance to more than a million families, or about four million people.

Who else can say that? No one. No other non-governmental agency has provided so much assistance to the victims of the 2005 hurricane season. And no other organization has touched so many lives, not only in this corner of the world, but also around the world, for more than a century.

It's difficult to quantify 125 years of compassionate care for Americans at home and so many people abroad. It amounts to millions of man hours, and hundreds of millions of lives -- to generations: grandfathers, fathers, and sons -- all impacted in one way or another by the Red Cross. All with a story about how the Red Cross provided life-saving blood, or communication, or transportation, or financial assistance to families in need.

Of course you know the Red Cross is five even squares. A square points to each compass point, and at the center of it all, is you. Thank you for volunteering and working for the Red Cross. Thank you for sharing your tremendous capacity for love and kindness with others.

A hundred years from now, scientists may study a unique species called "the volunteer." I suspect they'll discover an interesting correlation between the volunteer's activities and the key to one of life's most elusive gifts: happiness.

Congratulations on your 125th anniversary. And thank you for inviting me to share this moment with you. Thank you all, and God bless you.