For Immediate Release
Office of the Press Secretary
May 11, 2006

THE PRESIDENT: After September the 11th, I vowed to the American people that our government would do everything within the law to protect them against another terrorist attack. As part of this effort, I authorized the National Security Agency to intercept the international communications of people with known links to al Qaeda and related terrorist organizations. In other words, if al Qaeda or their associates are making calls into the United States or out of the United States, we want to know what they're saying. 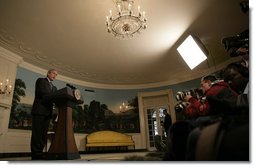 First, our international activities strictly target al Qaeda and their known affiliates. Al Qaeda is our enemy, and we want to know their plans. Second, the government does not listen to domestic phone calls without court approval. Third, the intelligence activities I authorized are lawful and have been briefed to appropriate members of Congress, both Republican and Democrat. Fourth, the privacy of ordinary Americans is fiercely protected in all our activities.

We're not mining or trolling through the personal lives of millions of innocent Americans. Our efforts are focused on links to al Qaeda and their known affiliates. So far we've been very successful in preventing another attack on our soil.

As a general matter, every time sensitive intelligence is leaked, it hurts our ability to defeat this enemy. Our most important job is to protect the American people from another attack, and we will do so within the laws of our country.