For Immediate Release
Office of the First Lady
May 9, 2006

MRS. BUSH: Thank you all very much. Thank you, Luma. Thank you very much for your kind introduction. Thank you for this wonderful idea, the Mosaic Foundation, and the Mosaic Sesame. I want to also recognize Nermin Fahmy, the Spouse of the Ambassador of the Arab Republic of Egypt, who is the Chairman of the Board of the Mosaic Foundation. And of course, Her Majesty, Queen Rania, we're so happy that you're here with us tonight. 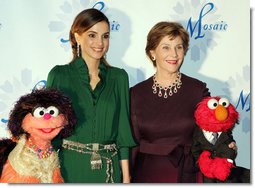 I'm delighted to be here this evening with all of you, distinguished members of the diplomatic corps, members of Congress, Cabinet secretaries, royal guests, and of course, Khokha and Elmo.

Her Majesty, Queen Rania, in addition to being the mother of four beautiful young children -- and she's probably watched a lot of Sesame Street because of that -- Her Majesty is an eloquent advocate and role model for women and children everywhere. Improving the lives of women and children is also the reason we're here tonight at the Mosaic Foundation Gala.

When the Mosaic Foundation was established in 1998, these ambassadors' wives saw their time in the United States as an opportunity not only to help their spouses in their important work, but also to help others around the world. President Bush and I thank you for your dedication and your service, and we especially appreciate your commitment to strengthen the ties between America and the peoples of the Arab world. (Applause.)

And one of the best ways to bring our countries closer is to work together on our shared challenges, like extending opportunity to all children. We know to accomplish this goal, every child must be educated. So this evening, I'm especially delighted to celebrate the Mosaic Foundation's partnership with Sesame Workshop.

Sesame Street and I go back a long way -- not as early as Luma, I'll have to say, but I often watched the show with my daughters Barbara and Jenna when they were little. I remember once especially, when Jenna was just a baby, one year old maybe, I was sitting at my desk, and she was sitting on the floor in front of Sesame Street, and a very simple, very charming lesson came on to count just one, two, three, with a ball that jumped at every count of one, two, three, and really very effective music. And Jenna watched this little segment on Sesame Street, and then turned to me with a very knowing look, like, wasn't that amusing? (Laughter.)

Then, after Barbara and Jenna were grown, I had the chance to be on Sesame Street in the United States with Elmo, where Elmo and I taught children the sound of W. I thought they gave me a very appropriate letter. (Laughter.) "Wubba, wubba, woo," we said for W. 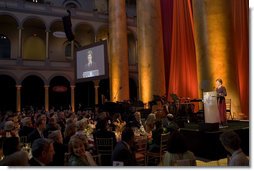 Now with the help of Sesame Workshop and the Mosaic Foundation, millions of parents around the world can spend mornings on Sesame Street with their children, like I used to do with Barbara and Jenna. Sesame Workshop already has unique national programs in ten countries outside of the United States, and many more shows will begin airing soon. Secretary Rice recently visited Indonesia, where she announced an $8.5 million partnership between USAID, Sesame Workshop, and the Indonesian government to bring the show to children there by 2007.

And last year, when I was in Cairo, Suzanne Mubarak and I had a wonderful time when we taped a segment for Alam Simsim, the Sesame program for Egyptian children. That's when I first met Khokha, who is here tonight. Khokha came all the way from Egypt to be with us. Khokha wants to be an astronaut or a doctor when she grows up, and she's encouraging Egyptian girls to pursue their dreams, in every field, even those that are not traditionally open to girls.

From Germany to China, from Mexico to Jordan, children are learning to count, they're learning the days of the week and the colors of the rainbow, from Sesame shows produced in their own languages and cultures. These shows are teaching children around the world how to get along with their neighbors, and most important, they're giving them all those great pre-reading skills so they can learn to read.

Reading is vital to our goal of improving lives for women and children around the world. Across the globe, more than 800 million people are illiterate; 85 percent of them live in just 34 countries, concentrated in regions affected by the highest poverty. And more than two-thirds of the 771 million adults who cannot read a simple book or write a basic sentence are women. In villages around the world, mothers who can read encourage their children to learn to read.

Literate mothers can also participate in their economies, and they can earn a living for themselves and their families. So widespread literacy isn't just a luxury for healthy societies, it's a basic requirement.

Increasing literacy is also essential to the spread of liberty that's now benefiting women and children across the globe, because literacy and freedom are inseparable. Literacy is the foundation of personal freedom. Being able to read, and choosing what we read, is how we shape our beliefs, our minds, and our characters.

Reading brings self-reliance and independence. For many women and their children, literacy can even mean the difference between life and death. A mother who can read can understand the label on a food container. She knows how to follow the instructions on a bottle of medicine. She's more likely to make wise decisions about her life that will keep her and her children healthy.

Literacy is the foundation of economic freedom. Free markets require informed consumers, and that means consumers who can read. Wider literacy also increases economic participation, which leads to more stable and vibrant economies.

To help more women and children enjoy the benefits of literacy, I'm convening a Conference on Global Literacy in New York this September in association with the United Nations General Assembly. Working in cooperation with the U.S. Department of Education, the U.S. State Department, USAID and UNESCO, we'll be looking at literacy programs that work, and connecting countries with the information they need to implement similar programs. (Applause.)

The conference will encourage leaders from around the world to become involved in literacy in their own countries. I invite you to participate, and to discover the opportunities to further support education and literacy for all.

Last year, Her Majesty Queen Rania and I visited a Discovery School in Jordan, where children learned through technology and about technology in a co-educational environment. During that trip, I met with children who shared their thoughts about Jordan's future. The girls spoke of greater opportunity for women, including the chance to occupy more influential positions of leadership. The boys spoke of how cutting-edge Jordanians would help lead the Middle East toward greater prosperity. This visit was a reminder that our children have no shortage of ambitious dreams for themselves and for their societies.

So tonight, I want to thank the Mosaic Foundation for your commitment to education for children in the Middle East and around the world. Thank you for your partnership with Sesame Workshop. Thank you for helping children around the world learn to read and to have fun doing it. And thank you again for being here tonight. I look forward to seeing you in New York in September at the global conference. Thank you all very much. (Applause.)