For Immediate Release
Office of the Press Secretary
May 8, 2006 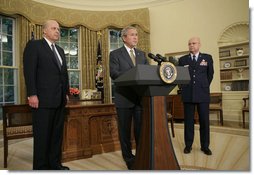 Mike has more than 20 years of experience in the intelligence field. He served for six years as Director of the National Security Agency, and thus brings vast experience leading a major intelligence agency to his new assignment. He also served as Commander of the Air Intelligence Agency, as Director of the Joint Command and Control Warfare Center, and as Deputy Chief of Staff of the United States and U.N. Forces in Korea.

He's held senior positions at the Pentagon, the U.S. European Command, the National Security Council, and served behind the Iron Curtain in our embassy in Bulgaria during the Cold War.

Mike knows our intelligence community from the ground up. He has been both a provider and a consumer of intelligence. He's overseen the development of both human and technological intelligence. He has demonstrated an ability to adapt our intelligence services to the new challenges of the war on terror. He's the right man to lead the CIA at this critical moment in our nation's history.

It's my honor to welcome Mike's wife, Jeanine, and their family to the Oval Office. I want to thank them for their willingness to support Mike Hayden in his long service to the United States.

With the agreement of the Senate, Mike will succeed a great patriot in Director Porter Goss. Under Porter's leadership, the CIA launched a five-year plan to strengthen the agency's human intelligence capabilities. This plan involves increasing the number of operatives and sources in the field, and building up the agency's analytical capabilities, so the hardworking men and women of the CIA have the resources they need to penetrate closed societies and secretive organizations.

Porter also played a vital role in shaping the new relationship between the CIA and the new Director of National Intelligence. And this process benefited greatly from the decades-long friendship between him and Director Negroponte.

Porter took on a critical job at a critical moment in our nation's history. He instilled a sense of professionalism in the CIA and maintained the high standards of this vital agency at a time of transition and transformation. Throughout his public life, Porter Goss has been a man of accomplishment and integrity, and America appreciates his service.

I'm confident that Mike Hayden will continue the reforms that Porter has put in place and provide outstanding leadership to meet the challenges and threats of a dangerous new century. Mike Hayden was unanimously confirmed by the Senate last year for his current post, and I call on the Senate to confirm him promptly as the Director of the Central Intelligence Agency.

The work of the CIA has never been more important to the security of the American people. America faces determined enemies who struck our nation on September the 11th, 2001, and who intend to attack our country again. To stop them we must have the best possible intelligence. The men and women of the CIA are working around the clock and around the world, in dangerous conditions to gain information that is vital to securing our nation. I appreciate their dedicated service. And so does Mike Hayden.

In Mike Hayden, the men and women of the CIA will have a strong leader who will support them. He will ensure they have the resources they need to do their jobs. He will enforce the secrecy and accountability that are critical to the security of the American people.

Mike, I appreciate your many years of service to our country. We're grateful that you've agreed to step forward and serve once again. Thank you very much.

GENERAL HAYDEN: Mr. President, thank you for those kind words and for the confidence that you and Ambassador Negroponte have shown to me in nominating me for this position. There's probably no post more important in preserving our security and our values as a people than the head of the Central Intelligence Agency.

When I returned from Korea in 1999 to take the position at NSA, I was befriended most of all by two people -- George Tenet, who was then DCI, and Porter Goss, then Chairman of the House Intelligence Committee. Both of these men befriended me and mentored me and supported me. And I will always be in their debt, especially now that I find that I've been nominated to be their successor. If I'm confirmed, I know that I will be standing on their shoulders.

In the confirmation process, I look forward to meeting with members of the Congress, better understanding their concerns and working with them to move the American intelligence community forward. This is simply too important not to get absolutely right.

To the men and women of the Central Intelligence Agency, if I'm confirmed, I would be honored to join you and work with so many good friends. Your achievements are frequently under-appreciated and hidden from the public eye, but you know what you do to protect the republic.

And finally, to my wife, Jeanine, and the other members of my family, thank you yet again for agreeing to continue your sacrifices. I can never repay you enough.

THE PRESIDENT: Congratulations, Mike. Thank you very much. Appreciate it.