For Immediate Release
Office of the Vice President
May 6, 2006

PRIME MINISTER SANADER: Ladies and gentlemen, let me welcome Vice President Cheney to Dubrovnik, Croatia. It is a great honor and a huge step forward in our bilateral relationship. We consider this visit of the Vice President of the United States of America as a friendly and supportive move to Croatia. We are looking forward to closely cooperating with the United States in the future. Croatia is preparing itself for the full membership of the EU and NATO. And we know that we can count on the U.S. support. And finally, we believe strongly in transatlantic partnership. There is no alternative to this. Europe has always had the U.S. as a partner in difficult times in the First World War, the Second World War, also in the recent history in our territory here. And we believe that this partnership should be strengthened and deepened. Thank you. 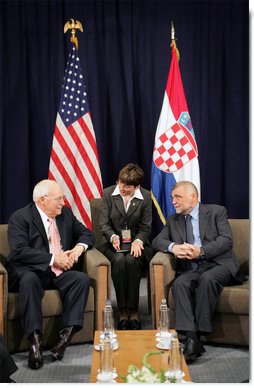 VICE PRESIDENT CHENEY: Thank you, Mr. Prime Minister. And I'm delighted to be here this evening, and to have the opportunity to spend some time with our host, Prime Minister Sanader. It's a very important developing relationship that the United States has with Croatia. I think all Americans have been tremendously impressed with how far Croatia has come since the last few years. We are strongly supportive of Croatia becoming a full member of the transatlantic community -- both in terms of working with NATO and the European Community. We also are deeply appreciative of the role that Croatia has played in Afghanistan, that is partners in the coalition and dealing with a very difficult situation in that part of the world. So I'm delighted to be here tonight. It's a beautiful setting and I look forward to our conversation. 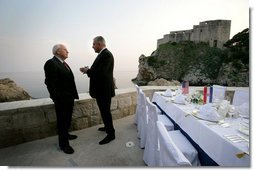