For Immediate Release
Office of the Vice President
May 6, 2006

MRS. CHENEY: Good morning. How are you?

What are we going to do, share that chair?

THE VICE PRESIDENT: No. (Laughter.)

MRS. CHENEY: But you're just here for a short time, why don't you (inaudible.)

THE VICE PRESIDENT: Well, listen, I'm sorry I've just got a few minutes. But I -- we thought this was an important meeting. I'm delighted to have the opportunity to meet all of you. You're described to us as part of the new generation of leaders in Kazakhstan. And so we wanted to take the opportunity to spend a few minutes and find out more about your backgrounds and how you look at the world. These kinds of relationships not only between governments, but also between peoples of our two countries are important, as well. I understand some of you spent some time in the states going to school there. We can go around and ask everybody just to say a word or two about their background and what you're currently doing. 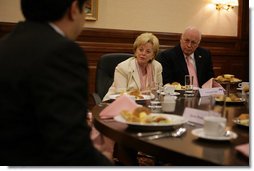 MR. RAMANKULOV: My name is Erlan Ramankulov. I am the director of the National Center for Biotechnology, of the Republic of Kazakhstan. I got my PhD at Texas A&M University, worked for CDC for bio companies, biotech companies, and two years ago got back to Kazakhstan to head the new trend in our economy in biotechnology.

MRS. CHENEY: So this is part of the (inaudible) Kazakhstan has so many rich opportunities, and its future (inaudible) but this sounds like a diversification of the things we think of first when we think of Kazakhstan, of their financial resources and so on.

MR. UZBEKOV: My name is Gani Uzbekov. I have a degree from London School of Economics. I have a master's in integration of financial markets, and I have a degree from Harvard University, Kennedy School of Government, Agency of International Development, international (inaudible) finance. And for the last two years, I have been working as our vice minister of finance. Right now I'm deputy (inaudible) of the Agency for Financial Security.

MRS. CHENEY: What does that mean? What is your job? What do you do?

MR. UZBEKOV: Well, it sounds cool, but -- (Laughter.) That agency supervises (inaudible) banking, the pension sector, stock market, insurance, everything which is related to the financial sector. I am personally responsible for insurance and loan banking institution, plus international financial issues. For example, WTO membership right now is very hard to persuade some (inaudible) but still it's very interesting, actually -- there is a (inaudible) which I work from, so those universities are very helpful. Classmate work -- I have a lot of classmates working around the world. I also have (inaudible) working with the governments in Latin America, Southeast Asia, Russia, East Europe. And it's very helpful, plus (inaudible) one of my (inaudible) sites (inaudible.)

MRS. CHENEY: That's amazing. So is the banking system new?

MRS. CHENEY: The banking system now is the best in (inaudible) and Eastern Europe, according to IMF and the World Bank.

MRS. CHENEY: No, I know that. But I wondered when (inaudible) it sounds as though it's certainly has got young leadership, so I thought perhaps it was young institutions.

MR. UZBEKOV: Yes, we have a lot of managers who are graduates from foreign universities, and they're actually working very well. And we have to (inaudible) as well as regulate.

MR. BIRTANOV: So the National Bank, the Central Bank of Kazakhstan.

MR. KASHINBEKOV: My name is Arman Kashinbekov. Originally I'm coming from (inaudible) that's an industrial city in the center of the country. I graduated from the university there and studied at Vanderbilt University, Nashville, Tennessee under the Presidential (inaudible) program. And that was subsequently followed by studying in Norway (inaudible) and also some other courses. I came back to Kazakhstan in 2000. I started working for national company, Kazakhoil and subsequently (inaudible) Kazakmunaigaz, that's the national oil and gas company in Kazakhstan. Then I was the director of the Foreign Investors Council chaired by the President of the country. And last year, I joined ConocoPhillips, Kazakhstan office, as a director for business development (inaudible) and that's where I am now.

MR. AUEZOV: My name is Magzhan Aeuzov. I'm a banker. I have two of my bosses here. (Laughter.) I'm a managing director of the country's largest private bank, KazKommertsbank. I did my studies in the States, as well. I did an undergrad at Georgetown, with a focus on international development, and a master's at Columbia (inaudible) before joining the Kazakh banking system, I worked for a Dutch-based ABN AMRO group, both in Kazakhstan and in the Netherlands. At the moment, I manage a corporate bank in Kazakhstan (inaudible.)

MR. ERLAND SAGADIEV: Erland Sagadiev. I'm involved in a number of private businesses, including food, real estate. We own a private university. I hold my master's from the University of Minnesota.

MS. AITZHANOVA: I'm Zhannar Aitzhanova. I am currently working as Vice Minister of Industry and Trade and special representative at WTO accession negotiations, World Trade Organization accession negotiations. I studied (inaudible) economics, and then I studied public administration at the Kennedy School of Government (inaudible) together with Gani, at Harvard University. And I worked (inaudible) before joining the government, I worked for the United Nations development program. I was in Kazakhstan and in New York. I lived in New York City in 1999 and then I moved to Harvard in 2002. My second son is from (inaudible.)

MRS. CHENEY: Well, I don't think your meeting could be more interesting than mine.