For Immediate Release
Office of the Vice President
May 4, 2006

VICE PRESIDENT CHENEY: I'm delighted to have the opportunity this morning to spend some time with President Saakashvili of Georgia.

The United States, obviously, has been very interested and strongly supportive of the democracy movement in Georgia. We recognize and are encouraged by all the reform movements that are underway and all the great work that's been done in Georgia to transform these institutions. We also support their aspirations to become more fully integrated with the European community, and look forward to working with them, as well, in the years ahead on all these issues. We are also, obviously, supportive of Georgia's territorial integrity, and I look forward to our conversation here today. 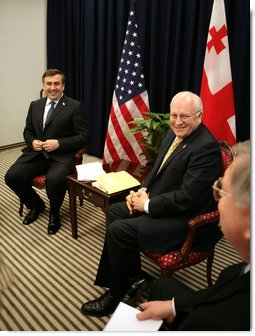 PRESIDENT SAAKASHVILI: Mr. Vice President, we are truly honored and pleased to see you here. You've been a great supporter of our cause of freedom for all these years.

As you know, for people in Georgia, America and freedom are synonymous. And this was confirmed by President Bush coming last year to Tbilisi, and certainly by your very warm words today at the meeting. These words are an inspiration not only for Georgian leadership, but also for the people of Georgia, for the people in our region.

We are committed to the principles you mentioned today, and we are grateful that you acknowledged our successes because that's -- free countries need to be more successful than the others. Thank you very much again for saying this here. And this was -- originally started as an initiative of President Yushchenko and myself last year. Originally, there were two of us -- then in Kiev, there were maybe five or six of us. And now it's really huge -- becoming big. And your presence is putting a final stamp of support and approval on our initiative that started last year. And I thank you for that, as well.