For Immediate Release
Office of the Press Secretary
May 4, 2006

THE PRESIDENT: Thank you all very much. Thank you for that warm welcome. I am honored to join you for the centennial celebration of the American Jewish Committee. I thank you for giving me the chance to come by and say, mazel tov. (Applause.) 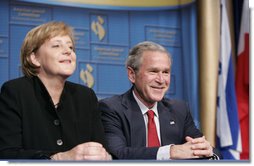 As you can see, I'm keeping pretty good company up here. (Laughter.) It's such an honor to share this podium with my friend, Kofi Annan, the Secretary General of the United Nations, a man dedicated to peace. He's a fine fellow. I'm proud to call you "friend," Mr. Secretary General. Thank you for being here.

I'm also thrilled to be able to introduce, in a second, the Chancellor of Germany, Angela Merkel. It's such an honor to have you here, Madam Chancellor. We're thrilled you're here and thank you for coming tonight. (Applause.)

I would like to introduce Angela Merkel to the AJC. This organization was formed in 1906 by American Jews concerned about the repression of Jews in Russia. The founders asked President Theodore Roosevelt to intervene with the czar and open America's doors to Jewish refugees escaping Russian oppression. President Roosevelt wisely agreed.

He was so impressed with AJC's leaders that he invited one of your founders, Oscar Straus, to become the first Jew to serve in an American President's Cabinet. President Roosevelt told Secretary Straus, I want to show Russia and some other countries what we think of the Jews in our country.

For a hundred years, American Presidents have benefited from the good advice of the American Jewish Committee, and I am one. (Applause.) You have had a profound impact on American political life because you have worked tirelessly for noble goals. The AJC has fought for tolerance and respect for the Jewish people, and all people. You stood for the rights of American Catholics in 1920s, and for the civil rights of African Americans in the 1960s, because you know that to defeat anti-Semitism, we must combat all forms of bigotry. (Applause.)

You have fought anti-Semitism, and at the same time you have worked to build bridges of understanding among the world's religions, and I thank you for that valuable contribution.

America is more compassionate and our world is more just because of the principled leadership of the American Jewish Committee. And so I first want to thank you for a century of service in freedom's cause. And I want to thank Bob Goodkind, Bruce Ramer, David Harris, and all those who were bold enough to invite me here to speak. (Laughter and applause.)

I appreciate Acting Secretary Lynn Scarlett of the Department of the Interior for joining us. I want to thank the members of Congress who are here. I appreciate the members of the diplomatic corps who have joined us today. I want to pay a special tribute to a friend of mine from Texas who has done a superb job as the Chairman of the U.S. Holocaust Memorial Council, and that's Fred Zeidman. (Applause.)

My administration shares a strong commitment with the AJC to make sure relations between Israel and America remain strong. (Applause.) We have so much in common. We're both young countries born of struggle and sacrifice. We're both founded by immigrants escaping religious persecution. We have both established vibrant democracies built on the rule of law and open markets. We're both founded on certain basic beliefs, that God watches over the affairs of men, and that freedom is the Almighty God's gift to every man and woman on the face of this earth. (Applause.) These ties have made us natural allies, and these ties will never be broken. (Applause.) America's commitment to Israel's security is strong, enduring and unshakable. (Applause.)

I'm looking forward to my meeting with Prime Minister Olmert in a couple of weeks. And as he comes to America, I cannot help but think about my friend, Ariel Sharon. Ariel Sharon is a friend who remains in our thoughts and prayers. He is a man of courage, and a man of peace. And so tonight we pray for his recovery; we rededicate ourselves to the cause to which he devoted his life, the peace and the security of Israel. (Applause.)

As you know, I'm a strong believer in democracy and free elections, but that does not mean we have to support elected officials who are not committed to peace. Hamas has made it clear that they do not acknowledge the right of Israel to exist, and I've made it clear that so long as that's their policy, we will have no contact with the leaders of Hamas. (Applause.) Democratically leaders [sic] cannot have one foot in the camp of democracy and one foot in the camp of terror. (Applause.) Hamas must accept the demands of the international community to recognize Israel, disarm and reject terrorism, and stop blocking the path to peace. (Applause.)

Many of the AJC leaders who have come to know me understand how my thinking was profoundly affected by the attacks on our country on September the 11th, 2001. The security of our nation is foremost in my mind. I vowed that day and I vow to you today that the United States of America will stay on the hunt and bring the killers to justice. (Applause.)

And one of the lessons of September the 11th is that this nation must take threats seriously before they fully materialize. (Applause.) And I saw a threat in Saddam Hussein. He had invaded a neighbor, he had used weapons of mass destruction against his own people, he had the capability of making weapons of mass destruction, he harbored terrorists, he was shooting at U.S. aircraft. He was a threat, and the world is better off without Saddam Hussein in power. (Applause.)

Our goal in Iraq is to have an ally in the war on terror and to help that young country establish an Iraqi-style democracy. Last December, 12 million people defied the car bombers and the killers and the terrorists, and said, that, we want to live in liberty. Recently a unity government has formed in Iraq. They reached an agreement on their top leadership posts. This new government represents a turning point in Iraq, a new chapter in our engagement there, and an opportunity for progress.

We will form a new partnership with these leaders; we will adjust our methods to support their priorities. We will strengthen our mutual efforts to achieve victory.

But I want you to understand that the new government is yet another blow to those who hate liberty. First, it will deny the terrorists their immediate aim of turning Iraq into a safe haven from which they can plot and plan attacks against the United States and our allies. And secondly, a democratic Iraq will be a major blow to the terrorists' hateful ideology, sending a powerful message across the region that the future of the Middle East belongs to freedom. The only way we can lose in Iraq is if we lose our nerve, and I am not going to lose my nerve. (Applause.)

The AJC, the American government, and most of the nations of the world are concerned about Iran. We're concerned because the Iranian regime is repressing its people, sponsoring terrorists, destabilizing the region, threatening Israel, and defying the world with its ambitions for nuclear weapons. America will continue to rally the world to confront these threats.

We're making progress. The first goal is to reach a common objective, and the objective amongst America, our European allies, Russia and China is to deny Iran a nuclear weapon. I spent time with Chancellor Merkel yesterday talking about this important issue. I can assure you we have a strong ally in Chancellor Merkel when it comes to uniting the world to speak with one clear voice. (Applause.)

We will continue to press the Iranian government to comply with the IAEA, as well as U.N. Security Council resolutions. America respects and admires the people of Iran. We respect their history and culture. We respect their right to choose their own future and win their own freedom. And America looks forward to the day when our nation can be closest of friends with a free and democratic Iran. (Applause.)

Before I introduce the Chancellor, I do want to talk about another subject that I know is important to you, and it's important to me, and that's Darfur. Last weekend, thousands rallied on our National Mall to call for justice in Darfur. And among the speakers was a man who understands the meaning of evil. You know him well. And it was Elie Wiesel put it this way: "We refuse to be silent because silent helps the killer, never his victims."

America is not silent. The United States is the only country to have called the crimes taking place in Sudan what they are: genocide. (Applause.) To end these atrocities, we've developed a clear standard. First, there must be a political course. Right now, as we speak, we're negotiating to bring a political settlement so that all sides will lay down their arms, a settlement between the government and the rebels. These conversations are taking place in Abuja.

But, as well, we must understand that the rape and the murder and the suffering must be stopped, and that's why I believe strongly that we must augment AU forces with a blue-helmeted U.N. force, with a NATO overlay, so that we can send a clear message to the leaders of Sudan: We will not tolerate the genocide taking place in that country. (Applause.)

My remaining time in office, I look forward to working with AJC leaders. I appreciate your steadfast strength when it comes to dealing with terror. I appreciate your strong belief in the power of liberty to transform the world we have. I look forward to working with you to continue to lay the foundations of peace, so that generations after our time will look at all of us and say, job well done.

And now it's my pleasure to introduce a leader who understands the importance of freedom. Angela Merkel grew up in East Germany during the dark days of the Cold War. She understands what it means to live in a free society. She understands the power of liberty. She's a straightforward person; she tells me what's on her mind. She's a woman of good judgment. She's a strong leader. It's my privilege to welcome her here, and to our friends at the AJC. (Applause.)