For Immediate Release
Office of the First Lady
May 4, 2006

Q Why don't we start by telling me, how did you find out about Kelsie, and what was it about her story that just grabbed you?

MRS. BUSH: Well, I found out about Kelsie because of her interview that she did - with you, I guess. And then I saw a follow up, where Bob Schieffer on CBS Evening News said how much money you'd gotten to, that you had raised almost $80,000. So that's how I knew about it. 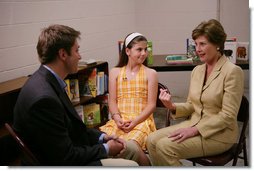 And then when I was coming here, of course, to also give money to libraries, I wanted the chance to get to meet Kelsie when I was here.

Q You know, she's here, so I don't want you to say too many nice things about her - (laughter) - but there must have been something in there that grabbed you, that touched you. What was it about her? You see lots of stories on the news.

MRS. BUSH: Well, of course, it was because she loved books and she wanted the schools to have books and libraries to have books - and that's what I like, too. When I was Kelsie's age that was my favorite thing to do - read. And books have been important to me my whole life. And I want books to be important to American kids, all of them, while they're in school and then when they grow up, as well.

Q And how much money did you give to Mississippi schools today?

MRS. BUSH: Today we gave $500,000 in grants in the whole Gulf Coast - it was seven grants in Louisiana and three grants here in Mississippi. This school got a $50,000 grant, which is about what it costs to build one elementary school collection from scratch, when you're starting to build a library.

MRS. BUSH: Twenty thousand for another. And that's what they asked for in their grant request.

Q You guys are quite a team. I think you should have a little competition going. (Laughter.)

Q So where is - are you going to give yours to public libraries, Kelsie?

MRS. BUSH: Great. Good. And are you actually from Biloxi?

KELSIE: No, ma'am. I'm actually from Morton, Mississippi, but we moved to Sleepy Hollow Camp Ground, to be closer to my dad's work and we've moved out of the FEMA trailer.

Q I promised Kelsie I wouldn't monopolize the interview, she had some questions she wanted to ask you, too. So you want to ask some of your questions?

KELSIE: I was wondering which library did you work at.

MRS. BUSH: Well, I worked at a Houston public library for a year. And then I worked at a school library in Austin, Texas, an elementary school. And before that I taught school, I worked in three different schools, one in Houston, one in Dallas, and then the school in Austin. And that was really fun.

Q And I was wondering what was your favorite food?

Q Because my dad makes a really good brisket, and you can ask

MRS. BUSH: Great. Did you have any?

Q Yes, I've tasted it. (Laughter.) If you guys are done interviewing, maybe I could ask another question. (Laughter.) Is that okay? Okay. Did you tell her, by the way, about when you wrote to your husband?

KELSIE: Oh, yes, I wrote to your husband. By the way, I've gotten yours, but they got wet from the hurricane -

KELSIE: -- so I was wondering if you could send me a picture?

KELSIE: And I wrote Mr. Bush's mom, too.

MRS. BUSH: I'll tell her to write you.

Q Why did you write to Mr. Bush's mom?

KELSIE: Because Mr. Bush didn't write me back yet. (Laughter.)

MRS. BUSH: Oh, he didn't write you back yet?

Q She was telling on him. (Laughter.)

MRS. BUSH: He gets a lot more mail than I do. I'm faster at returning letters.

MRS. BUSH: We'll check his correspondence and she if your letter has shown up yet on his desk.

Q And I can tell you she was a fan of you long before this ever happened, because the first time we did the interview she was talking about how much she really liked you. So this isn't just, like, playing up here for show. She's a big fan.

MRS. BUSH: Thanks a lot.

KELSIE: And everybody - from everybody in Mississippi, all my friends said that we love you as our own, our First Lady and your husband.

MRS. BUSH: Oh, well, thanks so much. I appreciate that a lot.

KELSIE: My mom and dad voted for you.

Q Not for her, necessarily. (Laughter.)