For Immediate Release
Office of the Vice President
May 3, 2006

Vice President Cheney and Lithuanian President Valdus Adamkus Make Remarks in the Blue Hall
The Palace of the President of Lithuania
Vilnius, Lithuania

PRESIDENT ADAMKUS: Welcome -- I definitely can say this is a historic meeting for us since you are the first Vice President of the United States to visit Lithuania. But at the same time, I have to say that President Bush was a little bit ahead of you in the same room. 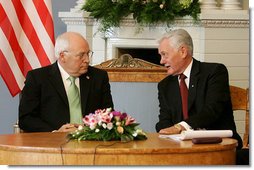 And I believe this is a very important occasion since we gather, I believe, the European leaders who are committed to seek the changes, especially in Eastern Europe, to accept the basic principles -- which the Western world definitely has accepted and already -- probably talking about United States for a couple hundred years already have as the basic principles for self-governing. But what's very important, Mr. Vice President, I believe that your presence because that shows I would say that in a world, we don't have big divisions to start the ideals and principles of democracy are -- and we are basically here to unite our efforts, in this case presenting those ideas to the people who were denied probably for centuries, too -- looking east. We know the experience of the 20th century, and this is a great opportunity for us probably to unite all our efforts just to accomplish what undoubtedly the human beings after the 20th century tragedy is really looking forward. So we welcome. We're grateful that you are representing the United States and showing a great interest for the common purpose.

VICE PRESIDENT CHENEY: Well, thank you very much, Mr. President. I and my colleagues are delighted to be here. We want to thank you for hosting this conference. I think it's a great opportunity to remind everyone, really, of the enormous strides that they've made in recent years in terms of having more and more of the world's population live in freedom and democracy, which you've achieved here in Lithuania and throughout the region. And it's really remarkable over the last 15 years in light of the -- we can be here today to recognize that success. But equally important, this is an opportunity for all of us to rededicate ourselves to continuing to promote freedom and democracy as values that are universal. And there are still parts of the world, including in this region, where people don't enjoy the full benefits of those values. And I want to, on behalf of the President and the American people, also thank you. Lithuania has been a great friend and ally for the United States, a full member of NATO now, actively involved in using your resources and your moral authority in supporting those opportunities -- not only in this part of the world, but in places like Afghanistan and Iraq, as well, too. We are deeply appreciative of your commitment and your leadership, and delighted to be here today to participate in what I think is an historic conference.