For Immediate Release
Office of the First Lady
May 3, 2006

MRS. BUSH: Thank you very much, Secretary Spellings. Doris Voitier thank you for everything you've done. You're really an encouragement to us - to me, particularly, visiting you, finding out how you just went to work. You didn't wait around for the bureaucratic kinks to be ironed out, you just went to work and you're an inspiration to me and to people all over the United States. 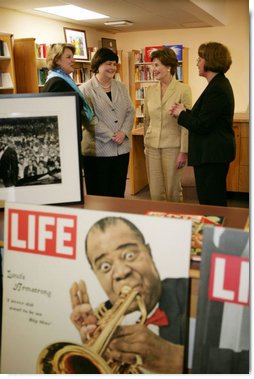 And the good news is, she's shown us it can be done. It can be done, and there are plenty of people around that will help. (Applause.)

I want to recognize Seletha Nagin, wife of Mayor Ray Nagin. Thank you very much for joining us today.

(Applause.) And, of course, Coach Raymond Blanco - the first spouses are all here together today, thank you very much for joining us. Don Powell, our Federal Coordinator for Gulf Coast Recovery. Don, you're doing a really great job, thank you a lot for that. And, of course, Ann Moore - this is our surprise visitor - the Chairman and Chief Executive Officer from Time, Inc., is joining us. Where's Ann? There she is, right here on the front row.

Wayne Warner, the principal of St. Bernard United School, and now going to be two schools, Chalmette and Andrew Jackson in the fall. Congratulations to you all.

I'm so especially happy to be here today, this is really a dream of mine, it's been a dream of mine since last fall, and that is to have this opportunity to start to help school districts rebuild their libraries, their school libraries. My dream is that we can have schools not have to worry about that piece, that somebody - the Foundation, in partnership, I hope, with many other foundations, can help schools rebuild their school library and they just wont have to worry about that. The librarian can just go to work and start ordering the collection that's a wide, rich collection for students that supports the curriculum, that's up to date - new books, obviously, that really make up a very important part of curriculum for students: books that they read for pleasure, books they read to learn to read, and then, of course, the books they read to learn about our history and about science and about math and all the other subjects that are taught in elementary, all through high school.

This is the 12th* visit I've had to the Gulf Coast since last September, and each time I am encouraged by seeing so much rebuilding of homes and of businesses.

And, of course, I'm especially encouraged to see the rebuilding of schools. New schools are symbols that there is future, that there is a bright future that awaits the restored Gulf Coast. And new schools are vital to the recovery that's underway. Thousands of families who left Louisiana after the hurricanes want to come home - but they can't come home unless there's a school for their children to go to.

For children who stayed in the Gulf Coast after losing their homes and all of their possessions -- and many times, their friends -- their school is their only familiar comfort left. And many, many students - and I know some of these students that I met the last time I was here, behind me, the high school students -- came back here even before their parents came back because they wanted to graduate from their high school; they wanted to be in their own school.

And as everyone knows, these new schools need new libraries. For many school librarians across the Gulf Coast, your old collections were your pride and joy, representing years of care and hard work. And as we heard from one librarian who's receiving a grant today, these collections meant even more to the children who use them.

`Before Katrina hit Second Street Elementary School in Bay St. Louis, Mississippi, the librarian, Marianne Higginbotham, had always taught her 4th and 5th graders to take good care of their library books. So as the hurricanes bore down on their homes, many of these children took Marianne's lessons to heart. During the evacuation, most of their possessions were left behind and ultimately lost. But as they fled, these kids made sure to save their library books. Most of the children's homes were destroyed, and for months some of them moved from evacuation shelters to relatives' homes, to FEMA trailers - all the while they safeguarded their library books.

When they returned to school in November, Marianne said some of the children were afraid they'd have a big fine - (laughter) - because their books were so late.

(Laughter.) But the students all treasured those books and they were so happy they'd saved them. And when the rescued volumes were presented to Marianne, the children told her proudly, "I brought your book back."

These books are the beginning of Marianne's new collection, and now with the help of one of these grants, she'll add many more new books to her reconstructed library.

Here in Chalmette - and we heard this already from Doris - you also tell the story of a difficult loss, followed by an inspiring renewal. In her grant application for schools in St. Bernard Parish, your associate superintendent, Beverly Lawrason, wrote of how every single school library in your district was wiped out by Hurricane Katrina. At Chalmette High School, the library contained almost 29,000 volumes. I know you were especially proud of your collection of Life Magazines, which dated back to the 1940s. And the students used these as primary sources to read about World War II, to read the lead up to World War II, and what happened when those veterans came home from overseas at the end of the war. But when Katrina struck, every book and every magazine was lost to eight feet of water.

In 2001, the Laura Bush Foundation for America's Libraries was established to help school libraries expand their book collections. Over the last four years, the Foundation has awarded 428 grants, totaling more than $2 million in 49 states. Soon we'll announce this year's round of 200 more schools across the United States.

But shortly after the hurricanes, as Marshall told you, the leadership council of the Foundation gathered for what was to be our last meeting. The leadership council, who are the fundraisers, had raised what their goal was - it was going to be the endowment for the Foundation, so we were going to be able to quit trying to raise money. But at that meeting we decided to establish a special fund to help schools in the Gulf Coast region.

So we established the Laura Bush Foundation's Gulf Coast School Library Recovery Initiative. And Marshall, the one who's with us today, is the one who said, "Let's not disband our committee. Let's do what we can to help these Gulf Coast school libraries." So I want to thank Marshall. Because he said that, he's now the taskforce committee chair. (Laughter and applause.) Thank you very much, Marshall.

With the hard work of people like Marshall, this initiative will help Gulf Coast schools that were damaged by the hurricanes rebuild their book and material collections for their school libraries. And the task is huge. According to the U.S. Department of Education,

1,121 private and public schools in the Gulf Coast region were damaged or destroyed. The basic cost of building a book collection for an elementary school library - and this is just materials, just books, not shelving, not computers - is about $50,000. And the cost for a good, wide secondary school basic library is usually over $100,000.

Schools are eager to have these resources so they can start rebuilding immediately. In fact, within a month of our announcements, 24 schools had applied for grants from the Gulf Coast Initiative, and today we're awarding the first round of grants to 10 schools in Louisiana and Mississippi. And I want to thank Marshall and everyone at the Foundation for moving so quickly to help these schools recover.

When Hurricanes Katrina and Rita roared through the Gulf Coast, they brought images of destruction that we're unaccustomed to seeing in the United States. But they also brought images we've come to expect in America.

In the faces of the victims we saw resilience and courage; in the rescue workers and volunteers who rushed to their aid we saw generosity and self-sacrifice; and in every act of rebuilding, especially of schools, we see endurance and hope. With the grants that are being awarded today, the Laura Bush Foundation is nurturing hope throughout this region. These grants will bring books back to school libraries. Rebuilt libraries will help bring children back to their schools. And rebuilt schools will bring families back to the revitalized Gulf Coast.

As we celebrate today's awards, it's important to remember that this is just a beginning. Throughout the year, as more schools rebuild and are ready to restock, we'll award more grants. Today, I want to encourage school librarians throughout the Gulf Coast to apply for funding so more schools can start on the path to recovery.

Even with these grants, rebuilding your libraries will be a challenging task. As one applicant wrote, "We have a very, very long journey ahead of us." In some ways, this statement describes the entire Gulf Coast recovery process - but so does the rest of the applicant's statement, she explained, "We're now of the mindset that the hard work, the can-do spirit and encouragement from our neighbors across the nation will help us along that journey."

The people of the Gulf Coast have the support of your neighbors from across the nation. We pray for you, we believe in you, and we know that with your hard work and can-do spirit, homes and schools and communities will be rebuilt.

So thank you very much for your optimism. Thank you for your hard work and for being here today.

Congratulations to all the grant award winners. May God bless you all here on the Gulf Coast, especially your children. And may God bless America. Thank you all.

* This is Mrs. Bush's 11th visit to the Gulf Coast region.