For Immediate Release
Office of the Press Secretary
May 1, 2006

THE PRESIDENT: I want to thank Secretary Rice and Secretary Rumsfeld, and General Pace, thank you for being here as well. Thank you for joining me this morning.

They came by the Oval Office to brief me on their recent trip to Iraq. First of all, I appreciate them both going over there to send my best wishes to the new government and to Prime Minister-designate Maliki, as well as the new Speaker and the President. I had spoken to them on the phone, but I thought it was very important for both Secretaries to go firsthand, to be there with the leadership to say we're supporting them. It's very important for these two senior officials to sit down with these new folks and say, you have our support and we want you to succeed. 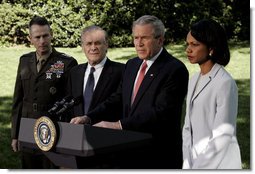 And they brought back interesting impressions from the three new leaders. They said they were optimistic people, that they're full of energy and they're very eager to succeed. And that's really important for the American people to know, that we've got partners in this effort who are dedicated to a unified Iraq and dedicated to putting a government together that is one that will represent all the Iraqi people.

This new government is going to represent a new start for the Iraqi people. It's a government that understands they've got serious challenges ahead of them. And the three leaders spoke to Secretary Rice and Secretary Rumsfeld about their need to deploy the growing strength of the Iraqi security forces in such a way as to defeat the terrorists and the insurgents. And we will continue to support them in that effort. That they talked about the need to establish control over the militias and other unauthorized armed groups and enforce the rule of law. And we will support them in these efforts to achieve that important objective.

They talked about the need to rebuild infrastructure and strengthen their economy, and we agree with that assessment.

And, finally, they talked about the need to make sure that all Iraqis share in the benefits of this new democracy. A new Iraqi government represents a strategic opportunity for America -- and the whole world, for that matter. This nation of ours and our coalition partners are going to work with the new leadership to strengthen our mutual efforts to achieve success, a victory in this war on terror. This is a -- we believe this is a turning point for the Iraqi citizens, and it's a new chapter in our partnership.

There's going to be more tough days ahead. These Secretaries know that, they're realistic people. They have brought an assessment of what they saw on the ground, and some of it's positive and, obviously, there's some difficult days ahead because there's still terrorists there who are willing to take innocent life in order to stop the progress of democracy. But this government is more determined than ever to succeed, and we believe we've got partners to help the Iraqi people realize their dreams.

Last December the Iraqi people voted to have a free government. I know it seems like a long time ago for the American people. But what we have begun to see now is the emergence of a unity government to represent the wishes of the Iraqi people. Last December millions of people defied the terrorists and killers, and said, we want to be free, we want a unity government. And now what has happened is, after compromise and politics, the Iraqis have come together to form that government. And our Secretaries went over there to tell them that we look forward to working with them as partners in peace.

So I want to thank you all for going. I appreciate your dedication to the cause of peace. Thank you.