For Immediate Release
Office of the Press Secretary
April 26, 2006

THE PRESIDENT: Good morning. I'm here in the briefing room to break some news. I've asked Tony Snow to serve as my new press secretary.

Tony already knows most of you, and he's agreed to take the job anyway. (Laughter.) And I'm really glad he did. I'm confident Tony Snow will make an outstanding addition to this White House staff. I am confident he will help you do your job. My job is to make decisions, and his job is to help explain those decisions to the press corps and the American people. 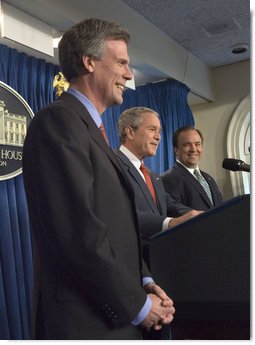 He understands like I understand that the press is vital to our democracy. As a professional journalist, Tony Snow understands the importance of the relationship between government and those whose job it is to cover the government. He's going to work hard to provide you with timely information about my philosophy, my priorities, and the actions we're taking to implement our agenda.

He brings a long record of accomplishment to this position. He has spent a quarter of a century in the news business. He's worked in all three major media -- print, radio and television. He started his career in 1979 as an editorial writer for The Greensboro Record in North Carolina. He's going to -- went on to write editorials for The Virginian-Pilot in Norfolk. He ran the editorial pages in both The Daily Press of Newport News and The Washington Times. He's written nationally syndicated columns for both The Detroit News and USA Today.

During his career in print journalism, he's been cited for his work by the Society for Professional Journalists, the Associated Press, and Gannett. For seven years, he served as the host of "FOX News Sunday." Most recently, he reached Americans all across our country as the host of "The Tony Snow Show" on FOX News Radio, and "Weekend Live with Tony Snow" on the FOX News Channel.

He's not afraid to express his own opinions. For those of you who have read his columns and listened to his radio show, he sometimes has disagreed with me. I asked him about those comments, and he said, "You should have heard what I said about the other guy." I like his perspective, I like the perspective he brings to this job, and I think you're going to like it, too.

Tony knows what it's like to work inside the White House. In 1991, he took a break from journalism to serve as Director of Speechwriting and Deputy Assistant to the President for Media Affairs. He's taught children in Kenya. He belongs to a rock band called Beats Working. He's a man of courage, he's a man of integrity, he loves his family a lot. He is the loving husband of a fine wife, and the father of three beautiful children.

He succeeds a decent and talented man in Scott McClellan. I've known Scott since he worked for me in Texas. We traveled our state together, we traveled our country together, and we have traveled the world together. We have also made history together. Scott should be enormously proud of his service to our nation in an incredibly difficult job. I've always -- I will always be grateful to him. I will always be proud to call him, "friend." 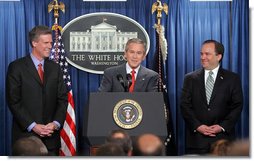 I appreciate Scott's offer to help Tony Snow prepare for his new job, and I'm proud to welcome Tony as part of our team.

MR. SNOW: Well, Mr. President, I want to thank you for the honor of serving as Press Secretary. And just a couple of quick notes, I'm delighted to be here. One of the things I want to do is just make it clear that I -- one of the reasons I took the job is not only because I believe in the President, because believe it or not, I want to work with you. These are times that are going to be very challenging. We've got a lot of big issues ahead, and we've got a lot of important things that all of us are going to be covering together.

And I am very excited, and I can't wait, and I want to thank you, Mr. President, for the honor, and thank all you guys for your forbearance, and I look forward to working with you.