For Immediate Release
Office of the Press Secretary
April 25, 2006

THE PRESIDENT: Thank you. Be seated. 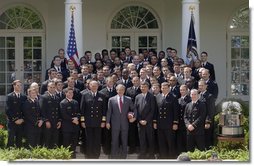 I also want to announce that Coach Johnson is now a member of the White House Frequent Visitors Club. (Laughter.)

I appreciate, like a lot of Americans, the football rivalry between our military academies. It's truly one of the country's great traditions.

This season the Midshipmen have pretty well handled that rivalry in good shape, set a good standard by winning their games against the Air Force and the Army. But the greatest achievement for the Midshipmen will be when they join their counterparts from West Point and Colorado Springs to help us win the war on terror. So we're glad you all are here.

I'm particularly pleased to see members of the Naval Academy Board of Visitors who are also in the United States Congress, starting with Congressman Steny Hoyer. Thank you for coming, Steny. Congressman Mike McIntyre, proudly wearing that Navy hat. Congressman John Kline. As well, we have Congressman Ben Cardin. Thank you all for coming -- proud you're here.

I appreciate the Secretary of the Navy Don Winter is with us. Mr. Secretary, thank you for coming. Admiral Ed Giambastiani -- and for those of you who don't speak English too well, we call him Admiral G -- happens to be the vice chairman of the Joint Chiefs of Staff, and a fine man.

Vice Admiral -- Admiral Mike Mullen, chief of naval operations. We're proud you're Admiral Mullen. Thanks for the job you're doing. As well as Vice Admiral Rod Rempt. Rod, it's good to see you. Thank you for your service.

I appreciate the members of the Naval Academy football team who are here. I thank the members of the Naval Academy coaching staff who are here, particularly the head coach who seems to have done a pretty good job, might deserve a little pay raise if I might make a suggestion, you know what I'm saying? (Laughter.) I don't know if you agree with that or not, Coach? Yes. (Laughter.)

This team is a source of great pride for the brigade of Midshipmen and Navy fans everywhere. It will hold a special place in Navy football history. Nothing like making history.

This team showed great resilience. After losing its first two games in heartbreaking fashion, the team went on to win eight of the next 10, and five of those were come-from-behind wins. 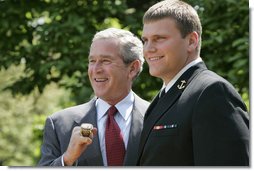 It took a little bit to be a Navy fan this year, a little patience, a little faith. But the faith paid off, the Poinsettia Bowl victory in San Diego was the first time a Navy team has ever won bowl games in back-to-back years. And we congratulate you for that feat. Pretty good deal to win big bowls, and study hard, and prepare to serve your nation.

I appreciate the fact that the Navy offense led the nation in rushing. And second place to the Navy rushing record was the mighty Texas Longhorn team -- (laughter) -- whose offensive lineman only weighed about 40 pounds per person more.

Seniors on this team have lead one of the most dramatic turn-arounds in college football history. Navy has won 26 games in the past three seasons after winning just three games during the previous three years. The seniors are the sixth class in Academy history to have beaten Army all four years.

The lessons learned on the football field are preparing you all well for your next mission, which is winning the war against the terrorists. Every player on this team works hard to win on Saturday afternoons, but like the rest of your Midshipmen, your top priority is preparing to defend this nation.

The thing I appreciate about the folks here is that when it came time to serve our country, they said, I volunteer to serve. I recognize there's something more important in life than serving myself. I want to serve my nation. And for that the American people are really grateful.

This nation is at war, a war we are going to win. And many of your teammates are serving and sacrificing at this very hour. And we send our prayers and best wishes to them. I appreciate the service of people like Marine First Lieutenant Brian Stann, a former Navy linebacker who was awarded the Silver Star last month for his actions and his bravery in Iraq.

Today, there are sailors and Marines who are leading vital missions in Afghanistan and in Iraq and around the world. Graduates from the Naval Academy patrol the world's oceans to keep deadly weapons out of the hands of the terrorists and are maintaining America's command of the seas.

You protect our nation, and equally importantly, you're laying the foundation of peace for a generation of Americans to come. And so we're here to first and foremost honor a really fine football team and present the Commander-in-Chief Trophy. But as well, we pay tribute to men and women who wear the uniform of the United States and say, thank you from the bottom of our collective hearts for protecting us.

My God bless the Midshipmen. And may God continue to bless our country. (Applause.)