For Immediate Release
Office of the Press Secretary
April 22, 2006

THE PRESIDENT: Today the Iraqi people reached an important milestone in their journey on democracy. Iraqi leaders announced agreement on the top leadership posts for a national unity government. This agreement represents compromise and consensus among many different Iraqi groups, and it came after months of patient negotiations. 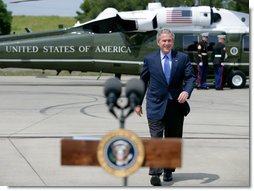 The agreement reflects the will of the Iraqi people, who defied the terrorists by voting to choose the men and women who will lead their nation forward. And this historic achievement, by determined Iraqis, will make America more secure.

Iraq is a nation made up of many different ethnic and religious groups, and Iraq's new leaders represent their country's great diversity. The Iraqi people have rejected the terrorists' efforts to divide them, and they have chosen the path of unity for their free nation.

The new Iraqi leadership now has 30 days to finalize the makeup of the Iraqi cabinet. Once inaugurated, the new government will hold power for up to four years. Unlike the interim and transitional governments that came before, the new Iraqi government will have full constitutional authority. And because it expresses the will of 12 million Iraqis who went to the polls last December, it will have the popular mandate to address Iraq's toughest long-term challenges.

Iraq's new leaders have important responsibilities to the people who chose them. The new government has a responsibility to deploy the growing strength of the Iraqi security forces to defeat the terrorists and insurgents and establish control over the militias. The government has the responsibility to rebuild infrastructure that makes commerce possible and that supports the education and health needs of the Iraqi people. The government must strengthen the economy and encourage job creation and enforce the rule of law. The new government must ensure that improvements in prosperity and security occur throughout the country, so that all Iraqis share in the benefits of their new democracy.

These are major challenges, and the new Iraqi government will not face them alone. America is helping Iraq's young democracy move forward. Iraqis and Americans are fighting side-by-side against a common enemy. We're going to defeat the terrorists in Iraq. We will deny them safe haven. And a free Iraq in the heart of the Middle East will be a powerful blow to the terrorists and a beacon of liberty for people across that region.

Formation of a new Iraqi government is an opportunity for America to open a new chapter in our partnership with the Iraqi people. The United States and our coalition partners will work with the new Iraqi government to reassess our tactics, adjust our methods, and strengthen our mutual efforts to achieve victory in this central front in the war on terror.

The new Iraqi government will assume growing responsibility for their nation's security. And as more Iraqi forces stand up, American forces will stand down. I want to thank all the brave Americans, both in our military and the diplomatic corps, who have served the cause of freedom in Iraq over the past three years. I thank their families who have sacrificed time with loved ones serving far from home. I want to thank our wounded servicemen and women, who have given so much to make this moment possible. And our nation remembers the fallen heroes who gave their lives to bring liberty to Iraq and security to America. And we will honor their sacrifice by completing this mission.

There's going to be more tough fighting ahead in Iraq, and there will be more days of sacrifice and struggle. Yet the enemies of freedom have suffered a real blow today. And we've taken a great stride on the march to victory. The Iraqi people have defied the terrorist threats, Iraqi soldiers and police have fought with valor for the freedom of their country, and Iraqi leaders have laid the foundations for a democratic government of, by, and for the Iraqi people.

On behalf of all Americans, I congratulate the Iraqi people and their new leaders. The Iraqis are showing the world that democracy is worth the wait, that liberty is worth the sacrifice, and that freedom is the future of every man, woman and child on this earth.