For Immediate Release
Office of the Press Secretary
April 20, 2006

THE PRESIDENT: Good morning. Laura and I are pleased to welcome President Hu Jintao and his wife, Madame Liu, to the White House. (Applause.)

The United States and China are two nations divided by a vast ocean -- yet connected through a global economy that has created opportunity for both our peoples. The United States welcomes the emergence of a China that is peaceful and prosperous, and that supports international institutions. As stakeholders in the international system, our two nations share many strategic interests. President Hu and I will discuss how to advance those interests, and how China and the United States can cooperate responsibly with other nations to address common challenges. 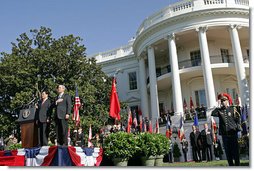 Our two nations share an interest in expanding free and fair trade, which has increased the prosperity of both the American people and the Chinese people. Trade in goods between our two nations has grown to $285 billion a year, and U.S. exports to China grew nearly 21 percent in last year alone. Our trade relationship can become even stronger, as China adopts policies that allow U.S. companies to compete in China with the same freedom that Chinese companies are able to compete here in the United States. So we welcome China's commitments to increase domestic demand, to reform its pension system, to expand market access for U.S. goods and services, to improve enforcement of intellectual property rights, and to move toward a flexible, market-based exchange rate for its currency. These policies will benefit the Chinese people -- and are consistent with being a responsible member of the international economic system and a leader in the World Trade Organization.

Prosperity depends on security -- so the United States and China share a strategic interest in enhancing security for both our peoples. We intend to deepen our cooperation in addressing threats to global security -- including the nuclear ambitions of Iran, the genocide in Darfur, Sudan, the violence unleashed by terrorists and extremists, and the proliferation of weapons of mass destruction. I appreciate China's role as host of the six-party talks, which will be successful only if North Korea makes the right strategic decision: to abandon all its nuclear weapons and existing nuclear programs as pledged to the other five parties. I will continue to seek President Hu's advice and cooperation, and urge his nation to use its considerable influence with North Korea to make meaningful progress toward a Korean Peninsula that is free of nuclear weapons. 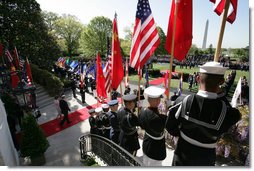 The United States will also be candid about our policy toward Taiwan. The United States maintains our one China policy based on the three communiqués and the Taiwan Relations Act. We oppose unilateral changes in the status quo in the Taiwan Strait by either side, and we urge all parties to avoid confrontational or provocative acts. And we believe the future of Taiwan should be resolved peacefully.

The United States and China will continue to build on our common interests; we will address our differences in a spirit of mutual respect. We have made progress in building a relationship that is candid and cooperative -- and President Hu's visit will further that progress.

And so, Mr. President, welcome to the White House. We're really glad you're here. I'm looking forward to our meetings, and I'm so thrilled to welcome Madam Liu, as well. Thank you for coming. (Applause.)

PRESIDENT HU: (As translated.) President George W. Bush, Mrs. Bush, ladies and gentlemen, dear friends. I'm glad to visit the United States in the lovely season of spring, at your invitation, Mr. President. I wish to convey to the great American people the warm greetings and best wishes of the 1.3 billion Chinese people.

I have come to enhance dialogues, expand common ground, deepen mutual trust and cooperation, and to promote the all-around growth of constructive and cooperative China-U.S. relations in the 21st century -- (audience interruption) --

PRESIDENT HU: The Chinese people have always cherished goodwill towards the American people. In 1784, U.S. merchant ship, Empress of China, sailed to China, opening the friendly exchanges between our two peoples. In mid 19th century, several dozen thousand Chinese workers, working side-by-side with American workers and braving harsh conditions, built the great railway linking the East and the West of the American continent. 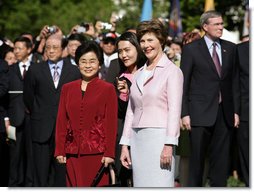 In our common struggle against fascist aggression over 60 years ago, several thousand American soldiers lost their lives in battlefields in China. Their heroic sacrifice still remains fresh in the minds of the Chinese people. Thanks to the concerted efforts made by our two governments and our two peoples over the years, our friendship has grown from strength to strength and yielded rich fruit.

The Chinese and the Americans are great peoples. The Americans are optimistic, full of enterprising drive, down to earth, and innovative. In just over 200 years, they have turned the United States into the most developed country in the world, and made phenomenal achievements in economic development and science and technology.

The Chinese are industrious, courageous, honest, and intelligent. They created the splendid ancient Chinese civilization. And today, they're firmly committed to the path of peaceful development and are making continuous progress in the modernization drive by carrying out the reform and opening up program.

Both China and the United States are countries of significant influence in the world. We share important common strategic interests in a wide range of areas, including economic cooperation and trade, security, public health, energy, and environmental protection, and on major international and regional issues. In particular, mutually beneficial and win-win China-U.S. economic cooperation and trade benefit our two peoples and promote the economic growth in the Asia Pacific region and the world at large. Indeed, they have become an important foundation for China-U.S. relations.

Enhanced interactions and cooperation between China and the United States serve the interests of our two peoples and are conducive to world peace and development. We should stay firmly rooted in the present while looking ahead to the future, and view and approach China-U.S. relations from a strategic and long-term perspective. We should, on the basis of the principles set forth in the three Sino-U.S. joint communiqués, respect each other as equals and promote closer exchanges and cooperation. This will enable us to make steady progress in advancing constructive and cooperative China-U.S. relations, and bring more benefits to our two peoples and people of the world.

We are ready to continue to work with the U.S. side and other parties concerned to peacefully resolve the nuclear issue on the Korean Peninsula, and the Iranian nuclear issue through diplomatic negotiation to uphold the international non-proliferation regime and safeguard global peace and stability. 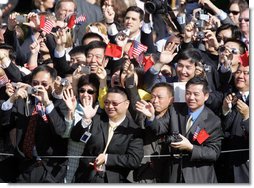 We are ready to work with the U.S. side in a spirit of seeking mutual benefit and win-win outcomes to properly address each other's concerns and facilitate the sound and the steady growth of bilateral economic cooperation and trade.

We will continue to pursue the strategy of boosting domestic demand and ensure fast and balanced economic and social development in China. This will create more opportunities for China-U.S. economic cooperation and trade. We will continue to advance the reform of the RMB exchange rate regime, take positive steps in such areas as expanding market access, increasing imports, and strengthening the protection of intellectual property rights, and further expand China-U.S. economic cooperation and trade.

We are ready to expand the friendly people-to-people exchanges and enhance exchanges and cooperation in science, technology, culture, education, and other areas.

We are ready to enhance dialogue and exchanges with the U.S. side on the basis of mutual respect and equality to promote the world's cause of human rights.

President Bush, you and the U.S. government have stated on various occasions that you are committed to the one-China policy, abide by the three Sino-U.S. joint communiqués, and oppose Taiwan independence. We appreciate your commitments.

Taiwan is an inalienable part of Chinese territory. We will continue to make every effort and endeavor with every sincerity to strive for the prospect of peaceful reunification of the two sides across the Taiwan Straits. We will work with our Taiwan compatriots to promote the peaceful development of cross-strait relations. However, we will never allow anyone to make Taiwan secede from China by any means.

Ladies and gentlemen, dear friends, the 21st century has entrusted people around the world with a lasting historic mission: That is to maintain world peace, promote common development and create a brighter future for mankind. Let us work together with the international community to build a world of enduring peace, common prosperity and harmony.

Thank you once again, Mr. President, for your warm welcome. (Applause.)