For Immediate Release
Office of the Press Secretary
April 19, 2006

President Meets with Governors Who Traveled to Kuwait, Iraq, and Afghanistan
The South Lawn

THE PRESIDENT: I just had breakfast with four governors who have returned from Kuwait, Iraq, and Afghanistan. I invited Secretary Rice and Secretary Rumsfeld, as well as Steve Hadley and Josh Bolten, to breakfast so that we could hear from these governors. 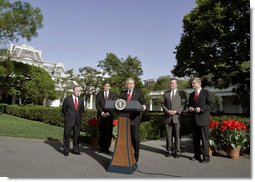 I assured them that our goal in Afghanistan and Iraq is victory. And victory will be achieved when there is a democracy in both countries that are able to sustain itself and defend itself.

Secretary Rice brought the governors up to date about a conversation she had with Ambassador Khalilzad. We fully recognize that the Iraqis must step up and form a unity government, so that those who went to the polls to vote recognize that a government will be in place to respond to their needs. In other words, we also recognize that vacuums in the political process create opportunity for malfeasance and harm. And so we assured these governors that we understand full-well that the political process in Iraq must occur soon, and we're working toward that end.

I again want to thank the governors for coming. I thought -- I asked them if they wouldn't mind saying a few words. We -- I don't expect everybody to agree with my decision to go into Iraq, but I do want the people to understand -- the American people to understand that failure in Iraq is not an option, that failure in Iraq would make the security situation for our country worse, and that success in Iraq will begin to lay the foundation of peace for generations to come.

GOVERNOR DANIELS: First, profound gratitude to the President and the administration for the chance to go, for the chance to carry a message to the men and women of our state who are serving in such large numbers there; our love for them and appreciation for what they're doing for the rest of us.

And my dominant impressions are, one, the sheer proficiency of the United States military in carrying the tasks they have been assigned. One knows this, but till you see it firsthand and on the immense scale, very hard to express how well they do what they are asked to do.

Secondly, the commitment to their safety, the enormity of the investment in each and every soldier, and the ingenuity and the constant adaptation to the evolving tactics of a very malicious and determined enemy is very heartening to people who -- like us, who feel responsible for the men and women in harm's way. Everything that can be done is being done, and on a daily basis.

I think, third, the involvement of the citizen soldier and the full integration of our Guard units, as well as reservists, and then of the services with each other. Very hard to tell -- impossible to tell until you ask who is whom. And this, I guess, can be thought of as the transformation that this President came to office intent on driving happening before our eyes.

Lastly, I will simply report that the commitment to a mission on the part of every single person I talked to -- and I gave them ample chances to express themselves out of earshot of their commanding officers and others -- is unanimous. They believe they are doing something important. And I was spontaneously asked to reenlist 13 different Indiana National Guardsmen for six-year new hitches, and swear them in while there.

And so I simply will report on their behalf that they think this is a noble thing they're doing and are very proud of the contribution they're making, first, to the security of our country and their loved ones at home, secondly, to the establishment of freedom in two lands that have been denied it for so long.

GOVERNOR MANCHIN: First of all, I want to say to all of the people in America about how proud that I am that -- the way our troops are being treated. Our citizen soldiers, our Guards, our reservists, and our active duty people from West Virginia, their spirits are high; they're committed to the safety and freedom that every American enjoys and should enjoy -- and hopefully make the rest of the world free. They're committed to getting the job done, and they're working very hard. They're a dedicated group of people. And it was so good to see them being in such high spirits.

It gave me a different perspective, and the commitment people have towards freedom, the desire that other people in the world have for the freedoms that we take for granted so many times. The one thing that we were able to talk to some of the provincial governors, there's nothing free in the word "freedom" -- nothing at all.

So they're working very hard and they're committed and dedicated. And our troops, the West Virginia troops, are committed to doing everything they can to have a successful resolve and to make sure they get their job done.

GOVERNOR VILSACK: The issues in Afghanistan and Iraq are extraordinarily complex. What you have is simultaneously trying to build a government and economy and provide security. And sometimes it can be difficult to express how difficult the challenge is.

I had the opportunity to visit with members of the Iowa National Guard, of whom I am extraordinarily proud, as we all should be. Two small, very short stories reflect my images of my trip. First was visiting with a member of the 134th Medical Company. They handle transportation of folks who are sick and ill. They provide transportation for our soldiers, but they also provide transportation for Iraqi citizens, and also detainees, and they do it in a professional and extraordinary way. They, in fact, have saved lives of detainees, and have expressed pride in the job that they've done.

The second story is of an individual, Robert Staves (ph), who is currently a instructor at the University of Northern Iowa. He has been instructing the ROTC there. He is now finding himself in Afghanistan as part of the training corps for the Afghan army. He explained it this way: He said, "Governor, what I see every day is hope in this country." And I said, "Precisely what do you mean by that?" He said, "I see it in the faces of the children walking to school, particularly the young girls walking to school, hand-in-hand with bookbags. They are thirsty for freedom and thirsty for an education."

There may be disagreements on policy, but no one can disagree with the fact that we have extraordinarily brave, competent, and dedicated individuals in the Armed Forces, serving in both Afghanistan and Iraq.

GOVERNOR BUSH: Mr. President, I cannot tell you how grateful I am to be able to go to Iraq and Afghanistan and Kuwait for Easter Weekend, to spend time with the most dedicated patriots I've had the privilege of meeting -- not just from Florida, but all across the country. These men and women, whether they're reservists, Guard, or enlisted men and women, are doing heroic work. They're well trained, they're well taken care of, their morale is high, they're totally focused on the mission. There is a strategy that they're implementing. It was inspirational.

And I'd just like to reiterate what the other governors have said, that it is very important that we stay the course, that we provide support for these incredible people that are doing such a service for liberty around the world and protecting our freedoms here. Thank you for allowing us to go.

THE PRESIDENT: Again, I want to thank the four governors for coming. Thank you for your eloquent statements. I appreciate your service to our nation. I assured the governors that the United States will complete the mission, that we will honor those who have paid the ultimate price by completing the mission, that we will help those who desire to live in freedom, and in so doing, we will lay the foundations of peace for a generation to come.

I appreciate you all coming.