For Immediate Release
Office of the Press Secretary
April 19, 2006

MR. McCLELLAN: Good morning, everybody. I am here to announce that I will be resigning as White House Press Secretary.

Mr. President, it has been an extraordinary honor and privilege to have served you for more than seven years now, the last two years and nine months as your Press Secretary. 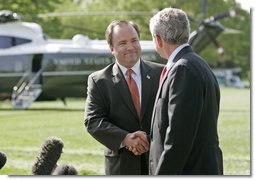 The White House is going through a period of transition; change can be helpful, and this is a good time and good position to help bring about change. I am ready to move on. I've been in this position a long time, and my wife and I are excited about beginning the next chapter in our life together.

You have accomplished a lot over the last several years with this team, and I have been honored and grateful to be a small part of a terrific and talented team of really good people.

Our relationship began back in Texas, and I look forward to continuing it, particularly when we are both back in Texas.

MR. McCLELLAN: Although, I hope to get there before you. (Laughter.)

I have given it my all, sir, and I've given you my all. And I will continue to do so as we transition to a new Press Secretary over the next two to three weeks. Thank you for the opportunity.

THE PRESIDENT: First of all, I thank Scott for his service to our country. I don't know whether or not the press corps realizes this, but his is a challenging assignment dealing with you all on a regular basis. And I thought he handled his assignment with class, integrity. He really represents the best of his family, our state and our country. It's going to be hard to replace Scott. But, nevertheless, he's made the decision and I accept it.

One of these days he and I are going to be rocking on chairs in Texas, talking about the good old days and his time as the Press Secretary. And I can assure you I will feel the same way then that I feel now, that I can say to Scott, job well done.