For Immediate Release
Office of the Press Secretary
April 18, 2006

PRESIDENT BUSH: It's been my honor to welcome the Prime Minister of Lebanon to the Oval Office. Prime Minister, thanks for coming.

PRIME MINISTER SINIORA: Thank you very much for giving us the opportunity.

PRESIDENT BUSH: Well, we just had a really interesting discussion. I told the Prime Minister that the United States strongly supports a free and independent and sovereign Lebanon. We took great joy in seeing the Cedar Revolution. We understand that the hundreds of thousands of people who took to the street to express their desire to be free required courage, and we support the desire of the people to have a government responsive to their needs and a government that is free, truly free. 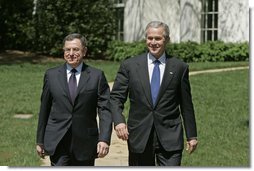 We talked about the need to make sure that there is a full investigation on the death of former Prime Minister Hariri, and we'll work with the international community to see that justice is done. We talked about the great tradition of Lebanon to serve as a model of entrepreneurship and prosperity. Beirut is one of the great international cities, and I'm convinced that if Lebanon is truly free and independent and democratic, that Beirut will once again regain her place as a center of financial and culture and the arts.

There's no question in my mind that Lebanon can serve as a great example for what is possible in the broader Middle East; that out of the tough times the country has been through will rise a state that shows that it's possible for people of religious difference to live side-by-side in peace; to show that it's possible for people to put aside past histories to live together in a way that the people want, which is, therefore, to be peace and hope and opportunity.

And so, Mr. Prime Minister, we're really glad you're here. I want to thank you for the wonderful visit we've had, and welcome you here to the White House.

PRIME MINISTER SINIORA: Thank you very much, Mr. President. I would like to really thank President Bush for giving us the opportunity to be here at the White House and to discuss matters of mutual interest to the United States and Lebanon, and matters that has to do with the developments that have been taking place in Lebanon.

For the past over 16 or 18 months, Lebanon has been undergoing major changes. And Lebanon has really been committing itself that we want the change to happen to -- in a democratic and a peaceful manner, but at the same time, to really stay course -- on course; that we are there to meet the expectations of the people to have a united, liberal, free country, and, at the same time, prosperous economy.

So that are the matters that we have discussed with President Bush, and I really would like to seize this opportunity to thank President Bush and the United States for the support that they have been extending to Lebanon throughout the past periods, and with all the resolutions that were taken since the assassination of Prime Minister Hariri. The United States has been of great support to Lebanon. 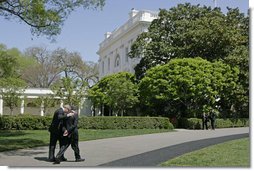