For Immediate Release
Office of the First Lady
April 10, 2006

MRS. BUSH: Thanks, everybody. Thank you all for coming out. I want to thank the school superintendents from Mississippi and Louisiana and Texas and Florida and Alabama that have joined me here for lunch today.

I founded a foundation in 2001 that gives money to school libraries -- the Laura Bush Foundation for School Libraries -- and last fall, after the hurricanes, we were having our last meeting to stop, close the fundraising for the foundation because we raised what we wanted to raise. And then we decided that we would continue to raise money, to give cash, especially for the Gulf Coast for the school libraries that were damaged or destroyed because of the hurricanes. And our goal is to continue to raise money so that as each school comes on line, ready to restock, as they rebuild that we'll be able to help them with a grant to buy materials. That's what the Laura Bush Foundation is for -- it's for books and materials. 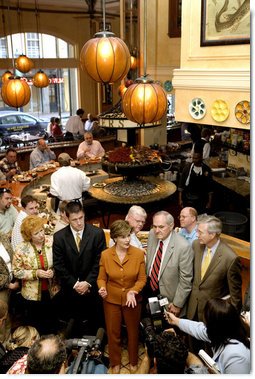 But we also want to work with a number of other partners, other foundations so we can also make sure that schools and school libraries get computers and other things, all the things that a school library should be stocked with for the well-being of their kids.

So I want to thank all these school superintendents. I want to congratulate them on the really, really terrific jobs that they've done under the most extreme circumstances any school chief operating officers, any state school superintends had to ever work under, especially in Louisiana and Mississippi, with the number of schools that were damaged or destroyed and the number of kids that were displaced out of their own schools.

And then a special thanks to Texas and Alabama and Florida, as well, for the kids that they are serving now, that moved to those states temporarily -- or maybe forever, we don't know -- from the Gulf Coast area.

So I want to thank you all for your very, very good work and for your dedication to the children all up and down the Gulf Coast.

Do you all have any questions?

Q Mrs. Bush, you talked in your speech a little bit about improvements in New Orleans since you've been here last. What have you seen, and do you think it's moving quick enough?

MRS. BUSH: Well, I don't know if I can say it's moving quickly; I don't know that. But I did -- I was very encouraged when we drove in from the airport. It's a drive in that I've done every single time I've been here. And this time, for the first time, there was really a lot of activity. You can see that some houses have been totally repaired and people were back in them. You could see trailers on some lawns, but with obvious work going on in the house. Some houses are just sort of -- looked like they were in the demolition stage, where the windows were gone but were starting to clean up; and a lot of debris out on the curb, which means somebody just went in their house and pulled out all the sheet rock or the other damaged things inside the house.

So I found that very encouraging. I think it was really just -- the amount of activity really looked like there is just a feeling of hope and a feeling of good things are going to happen.

Q You met Jeremy this morning. I just want to get your reaction to him, and what did you think, hearing his personal story?

The interesting thing was, from the man who works for the Marriott Corporation, Marriott says they have around 300 jobs. There are going to be a lot of jobs available -- constructions jobs, service industry jobs, a lot of other jobs all up and down the Gulf Coast. And if we can as a government, with community based organizations, as well as corporations, really try to make sure that people get the skills they need to take these jobs, we can really help people turn their lives around, especially young people.

Q What's your understanding of the greatest challenges facing public schools -- since that's what you were talking about today -- especially here in New Orleans? And what is the federal government going to do to help New Orleans rebuild its schools and make them better?

MRS. BUSH: Well, all the school districts that had schools that were affected by the storms have a lot of problems. Across the Gulf Coast, in the cities that were virtually destroyed or damaged heavily, like New Orleans, was, those cities no longer have a tax base; a lot of businesses have not reopened. And when people realize that your local taxes are what pay most of your school expenses, and you know that a city, a little town, for instance, in Mississippi, has totally been destroyed, doesn't have any tax base right now to rebuild.

That's certainly true in New Orleans, for all the neighborhoods that are gone, from the number of people that are gone, that aren't even living here anymore. And so that's a problem.

Another problem that I hadn't really thought of until we met and talked was how school districts are trying to project how many people will actually come back, how many kids they'll have, for instance, next September, when school opens again; how many they might have the next September, and really trying to do the demographics of how fast they can rebuild and how many kids will come back as they rebuild.

New Orleans has a chance right now to build a really very good school district. I know that the state has taken over the New Orleans Parish schools and I think that they have the opportunity now to really build a really good school district. In many cases, because schools were destroyed, all these town across the Gulf Coast will have the chance to build a new, and maybe better, facility. But, of course, that's capital-intensive; that costs money. And they're going to need to get money from their states, from the federal government, from foundations like this one. There are foundations all across the country that give specifically to education, that I know would have the Gulf Coast as a priority to try to get those schools rebuilt.

Thanks, everybody. Thank you all for coming out.