For Immediate Release
Office of the Press Secretary
April 5, 2006

THE PRESIDENT: The United States Senate is debating a very vital issue for our country, and that is immigration reform. I urge the senators to continue to work toward getting a comprehensive bill; a bill that will help us secure our borders; a bill that will cause the people in the interior of this country to recognize and enforce the law; and a bill that will include a guest worker provision that will enable us to more secure the border, will recognize that there are people here working hard for jobs Americans won't do, and a guest worker provision that is not amnesty, one that provides for automatic citizenship. 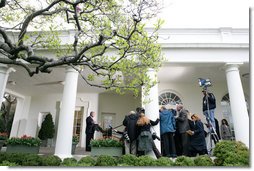 This is a vital debate. I thank the members who are working hard to get a bill done. I strongly urge them to come to a conclusion as quickly as possible and pass a comprehensive bill.