For Immediate Release
Office of the First Lady
April 4, 2006

MRS. BUSH: I just want to say to the press before we get started that I've been traveling around the United States on the Helping America's Youth initiative that President Bush announced at his State of the Union 2005, January 2005. And I've visited programs all over the country -- Big Brothers, Big Sisters programs, after-school programs, gang intervention programs, performing arts programs that teach youth employable skills -- all kinds of programs, debate programs that coach youth so that they can use their voice rather than their fists in conflict. 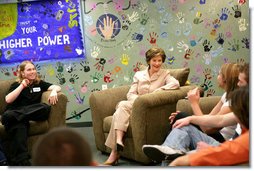 And this Center is funded in part by federal funds that come from access to recovery legislation passed by the United States government. And a huge amount of money has been appropriated for the last two years, 2004-2005, nationwide for parents and members of the court and other people who feel like they need to refer their own child or a child that's come before their court for substance abuse counseling and treatment; to be able to do that, and to not have not being able to pay stand in the way of helping children. We can't let children suffer with drug abuse and substance abuse because they can't afford to get the help they need.

So today I'm really glad to have this chance to be here to see one really good example -- and there are a number of great substance abuse programs around the United States -- but I'm glad to be here to talk about this one.

So now you all can listen as we have our conversation.